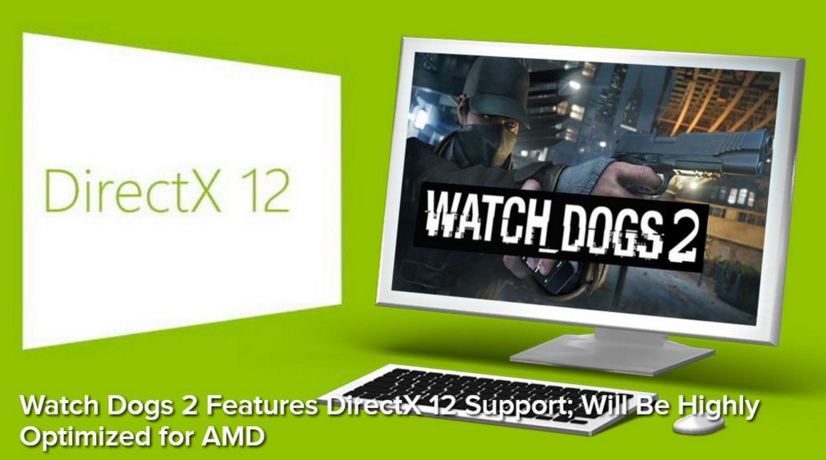 According to The Country Caller, Ubisoft took the stage during an AMD press event weeks ago at the Game Developers Conference and said that Watch Dogs 2 will support DirectX 12. Additional information regarding what DirectX 12 will bring to the sequel wasn’t given, but AMD pointed out that the PC game will be highly optimized for its GPUs. For some reason, this is the first time we’ve seen a report about Ubisoft using DirectX 12 in Watch Dogs 2 since its announcement. click on read more for get more informations.

Ubisoft’s original Watch Dogs installment hit the scene back in May 2014 for Microsoft Windows, PlayStation, and Xbox. It utilizes Nvidia’s GameWorks suite, which AMD’s Robert Hallock said was a “clear and present threat to PC gamers” because Nvidia’s software supposedly crippled the game’s performance on AMD hardware.

“Participation in the GameWorks program often precludes the developer from accepting AMD suggestions that would improve performance directly in the game code — the most desirable form of optimization,” Hallock told Forbes.

He added that the characteristics of the game are hidden behind layers upon layers of “circuitous and non-obvious routines,” and that this makes performing after-the-fact driver optimizations difficult. He even pointed out that Nvidia removed its public Direct3D code samples from its website and threw up a “contact us for licensing” page in its place.

Hopefully, the Watch Dogs 2 launch won’t be quite as dramatic. The game was officially announced during Ubisoft’s earnings release in February 2016, and the firm at that time stated that the game is scheduled to arrive by the end of fiscal 2017. So far the company hasn’t released any additional details regarding the game, but the DirectX 12 announcement shows that it will likely grace the Xbox One and Windows 10 before March 2017.

We expect to hear more about Ubisoft’s sequel this June during E3 2016, so stay tuned.