Quantum Break is an action-adventure third-person shooter video game. Players play as Jack Joyce, a person with time manipulation powers in a world where time stutters, making everything freeze except Joyce. Players can use a variety of firearms, as well as their time-manipulating powers to defeat enemies in the game. Joyce can stop time temporarily, allowing him to escape from attacks or freeze enemies, unleash a “Time Blast”, which is an offensive projectile, and reverse the direction of bullets. He can also interact with the environments, creating environmental effects that would harm hostile characters. This is Quantum Break!

The central story for Quantum Break has not changed. The story follows Jack Joyce (played by “The Following” actor Shawn Ashmore), who follows a call from his best friend and head of Monarch Solutions, Paul Serene (“Game of Thrones” actor Aidan Gillen), to check out a bold new experiment. Serene has created a vessel that allows him to travel through time, which would allow him to solve mankind’s greatest problems. However, disaster quickly strikes and an accident results in both Joyce and Serene gaining time-based powers. Serene uses his abilities to push his sinister agenda forward and stamp out any opposition in his way, including Joyce.

Meanwhile, Joyce is given several time-based abilities that he can use on the battlefield. It doesn’t take long to find uses for these skills. Joyce can freeze time in certain areas, reverse time in others, and also use offensive abilities, like a burst effect that affects foes in a single area. It won’t take long to find use for these abilities, because the number of shooting gallery sequences is a number that’s much closer to Remedy’s Max Payne than it is Remedy’s Alan Wake.

While all of this sounds well and good, Quantum Break begins to fall apart in the actual gameplay department. The shooting mechanics are rough, with precision and hit detection leaving a lot to be desired. Worse than that, however, are the platforming mechanics. There are several sequences that require Joyce to climb onto platforms and jump across the area to reach windows or high scaffoldings, but these sequences are best described as clumsy. Joyce’s leaps often miss their target and there are several spots that look climbable, but are actually not. These platforming sequences quickly became frustrating and it’s hard to imagine an entire game filled with these sequences.

Where Quantum Break shines is with its storytelling. The plot of attempted time travel gone horribly wrong is an interesting one, especially as it leads into a major mystery of how Serene went from ambitious and altruistic scientist to ruthless killer. There’s the connection between him and Joyce that’s fascinating to explore. There’s lore sprinkled throughout each stage, with collectible ‘Narrative Objects’ offering background on the story, setting, and the various players involved in the ongoing plot. It’s also helped greatly by both Ashmore and Gillen’s performances, enough that it’s worth overlooking some cringe-inducing lines. (Did you know Shawn Ashmore was in “X-Men?” If not, they sure will point that out repeatedly!) Plus, there are some beautifully-rendered character models, which look even more stunning on the game’s Windows 10 version, which was running on DirectX 12.

There are also the game’s tough decisions, known as ‘Junction Points.’ These chapters are played from the perspective of the villainous Serene. Here, players are confronted with a major decision, which play out with Serene using his powers to analyze the choices and their consequences. Once players make their decision, the consequences will play out in Joyce’s subsequent stages. However, they’ll also influence what is seen on the live action series. While the first Junction Point will result in one of two possible live-action scenes, there are more possible scenarios later on, as the decisions pile up. As for the live-action series itself, grab some popcorn, because each episode will take roughly a half-hour. But for those that are playing through Quantum Break a second time and just want to get through the game, the series is entirely skippable. 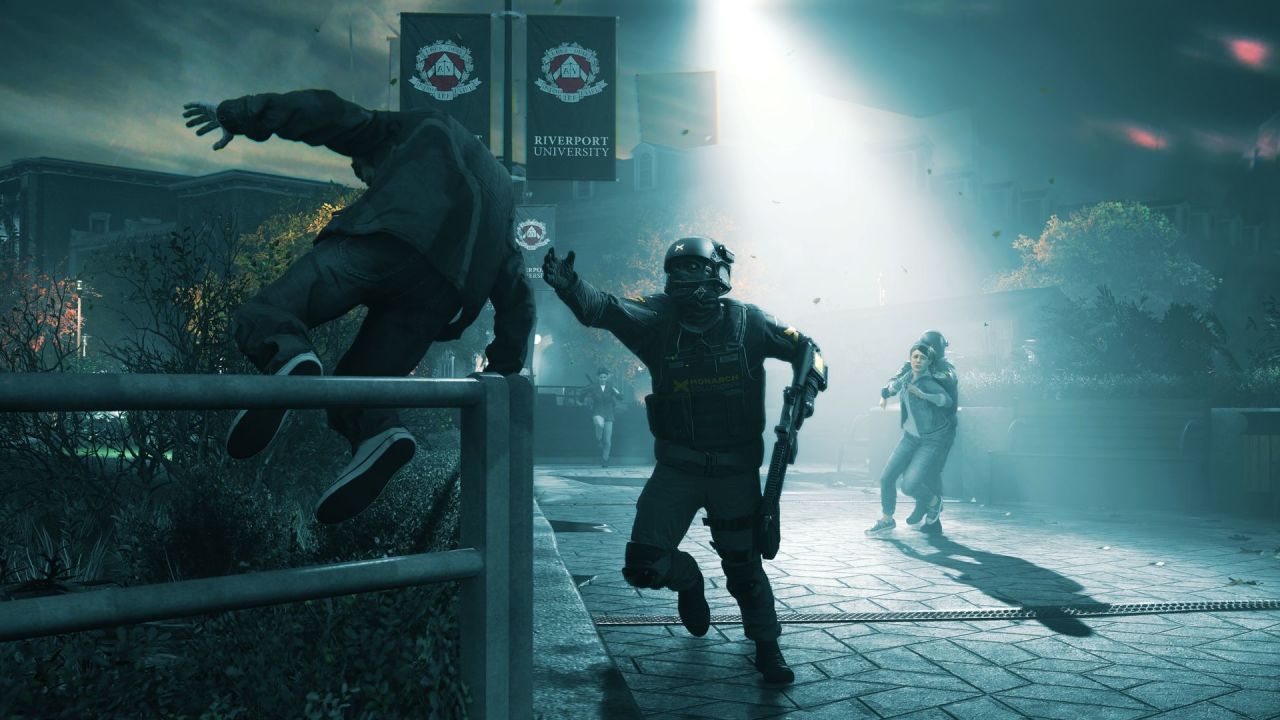 The first thing you might notice is that it’s got a whole new cast – and it seems strange saying that for a game, but we’re rolling with it. As the game evolved, Remedy’s face and motion capture improved so much that it decided to use well-known actors for Quantum Break. Gone is the unknown face of Jack Joyce that we saw in early trailers. Now our hero is played by X-Men’s Shawn Ashmore, while our baddie – Paul Serene, head of Monarch – is played by The Wire and Game of Thrones star Aidan Gillen.

The facial animation is fantastic, putting even games like Until Dawn and The Last of Us to shame. Every eye-roll, furrowed brow and facial tic is replicated in so much detail that it often takes your breath away. It feels like Quantum Break has taken the next leap in game graphics, living up to that next-generation level of gaming that Microsoft has been promising.

Well, we say that, and it’s true of nearly every face that’s brought to digital life in Quantum Break… apart from Dominic Monaghan. His face really is a case of uncanny valley – it looks like someone has unsuccessfully put him through Face Swap.

Are we playing a game or watching TV?

But there’s pretty much no danger of finding the gameplay monotonous, because Quantum Break has another ace up its sleeve. Half of the game, as we’ve mentioned, is actually done in a live-action TV series format.

The high production values found in the gameplay portions continue into the live action too. And what’s more, the TV show episodes are reactive to the choices you make in the game. It’s not quite Heavy Rain, but you arrive at the TV portions by passing through what Remedy Games calls “Junctions”.

Whereas the gameplay focuses on Jack Joyce’s portion of the story, the Junctions and the TV series tell the story from the baddies’ side. The Junctions force you to make a choice – the first one sees you choose whether to use a witness as a PR campaign or get rid of all the evidence. What you decide will affect the outcome of the TV series.

That means across the five chapters and four TV episodes, there are actually 40 variations of the show.

Quantum Break offers a cast that’s more than just a collection of familiar voices. Everyone in the main cast is instantly recognisable as their real-life actor counterpart, from protagonist Jack Joyce (Shawn Ashmore of X-Men fame), best-friend-turned-baddie Paul Serene (Aidan Gillen from Game of Thrones) and his intimidating right-hand man Mr Hatch (Lance Reddick who, like Gillen, became a household face in The Wire). Hell, they’ve even managed to get some Lord of the Rings alumni in there with Dominic Monaghan playing Paul’s brother, Will.

As the game kicks off, there are hints that Will and Jack have an estranged relationship, while Jack’s best bud Paul has been working with Will on an experiment which, unsurprisingly, is all about time travel. I don’t want to go into too many details of what I experienced in terms of the narrative, but suffice it to say, things don’t take too long to go bad, and the stakes are raised considerably as Jack is soon granted access to time-manipulation powers in the aftermath of an experiment gone awry.

Remedy has always had a deft touch when it comes to telling a compelling story, but Quantum Break feels more grounded and believable compared to the respective tales of a New York Cop in pursuit of a Rambo-besting body count and a Stephen King-esque writer encountering his horrific scribblings coming to life. Despite the obvious science-fiction associated with time travel, Remedy has pushed the human factor, with fantastic performances across the board.

We’re not sure whether people will think settling back to watch a 20-minute-or-so TV show episode mid-game breaks the flow of the gameplay, but we were content with this popcorn break. Especially since it’s like taking a Netflix break, it feels so high-quality.

There’s not much else I can say about the game past Act 1, but hopefully it’s painted a picture or piqued your interest as to whether to pick this up on your Xbox One. There were doubts with how the live action portion of the game will play out and that’s understandable. It kinda worked and it didn’t with Defiance, but with Quantum Break the episodes are optional to watch and have already been filmed.

Everything so far feels balanced and you yourself never feel like some over-powered super human. Until you start upgrading your powers and perfect their usage, that is. 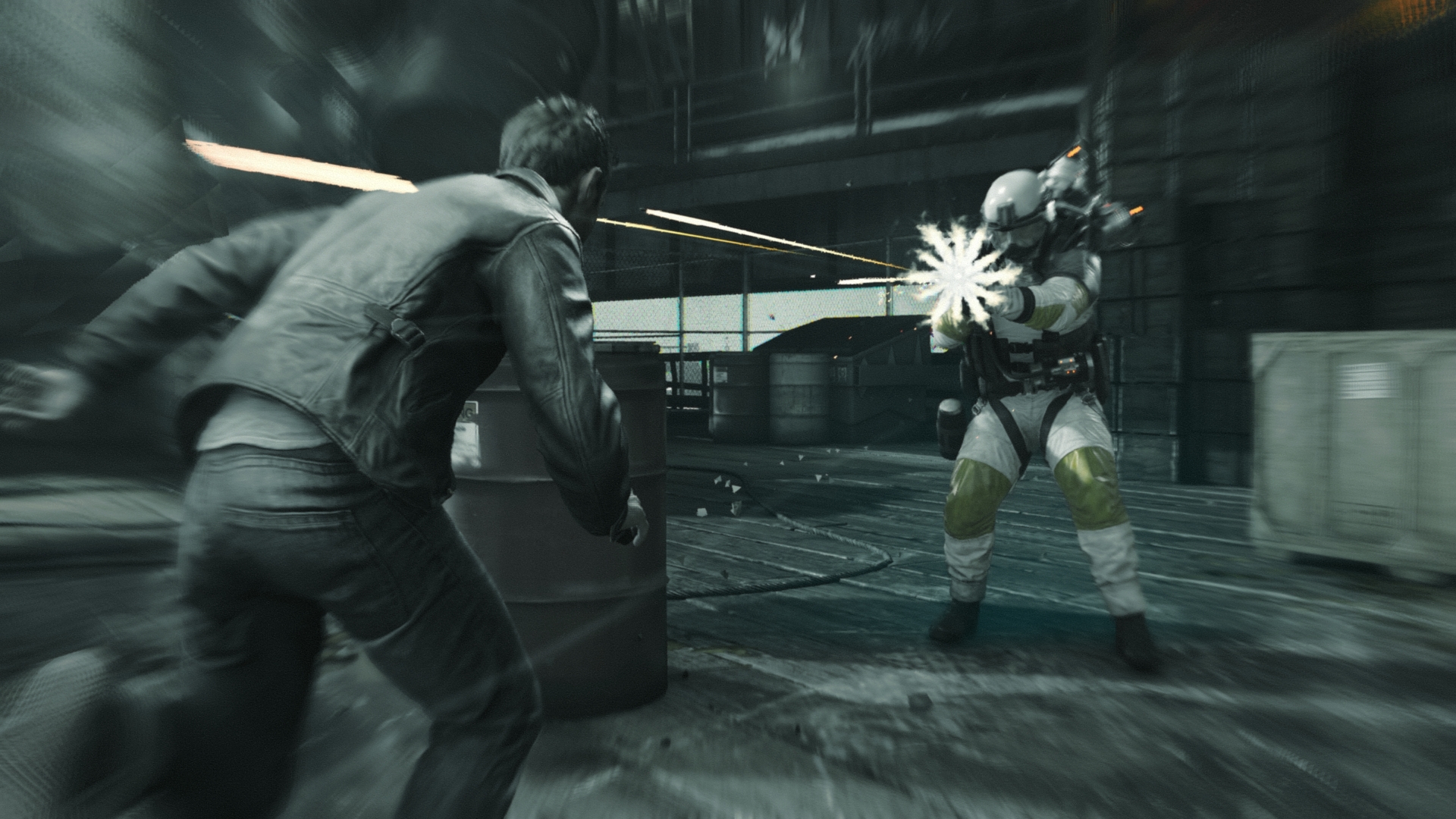