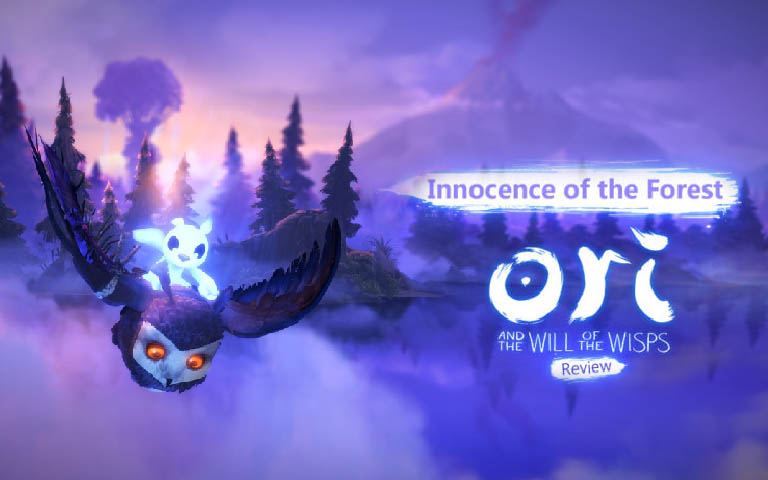 About five years after the release of Ori and the Blind Forest, Moon studios eventually released its sequel, which was one of the most anticipated games of 2020. After the milestones Moon studios achieved with the first game, it was evident that lots of people would count every second until the release of the next game in this beautiful Metroidvania series. In this article, we want to review and analyze this game to see whether it will come up to its expectations or not. 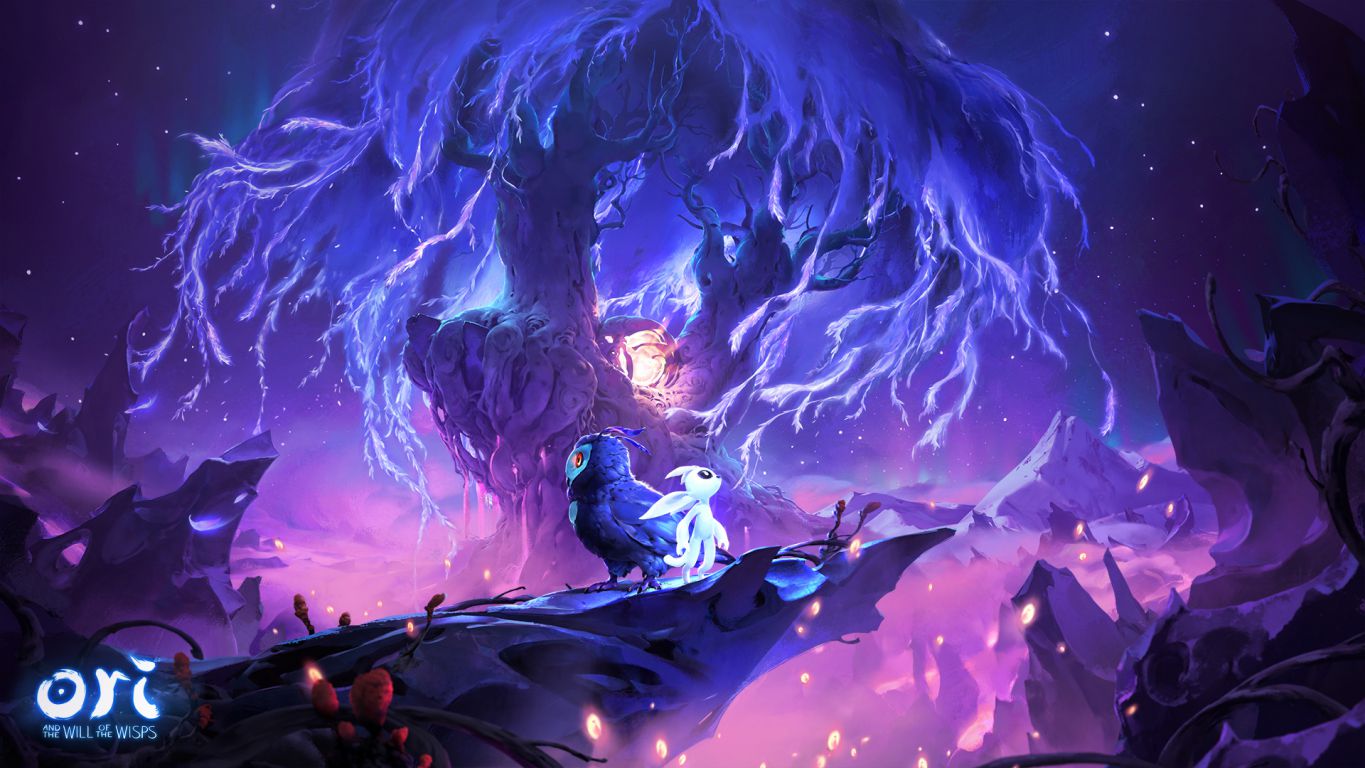 Ori and the Will of the Wisps

First, we start with the game story. If you’ve played Ori and the Blind Forest, you know that Ori is one of the games that prefer not to present an overly complicated story. Still, instead, it is one of the titles that use a minimalistic approach to narration. It successfully hit the mark and success in involving the players in a touching emotional story without complexities of most games.

In the first parts of the story, you witness that Ori’s family, including Naru and a new monkey or spider-like animal, adopt an orphan owlet, which is the only remaining offspring of Kuro, an owl in Ori and the Blind Forest, whom they call Ku. After a long time, Ku grows up, and Ori and others help him learn to fly using the feather of her mother. One night, Ku flies with Ori on his back, and after getting some distance from home, they are caught in a storm, and each one falls in a place in an island far from home. Now it’s Ori’s duty to find Ku. Of course, the story doesn’t go that simple, and events will happen that make Ori take hard and selfless choices. 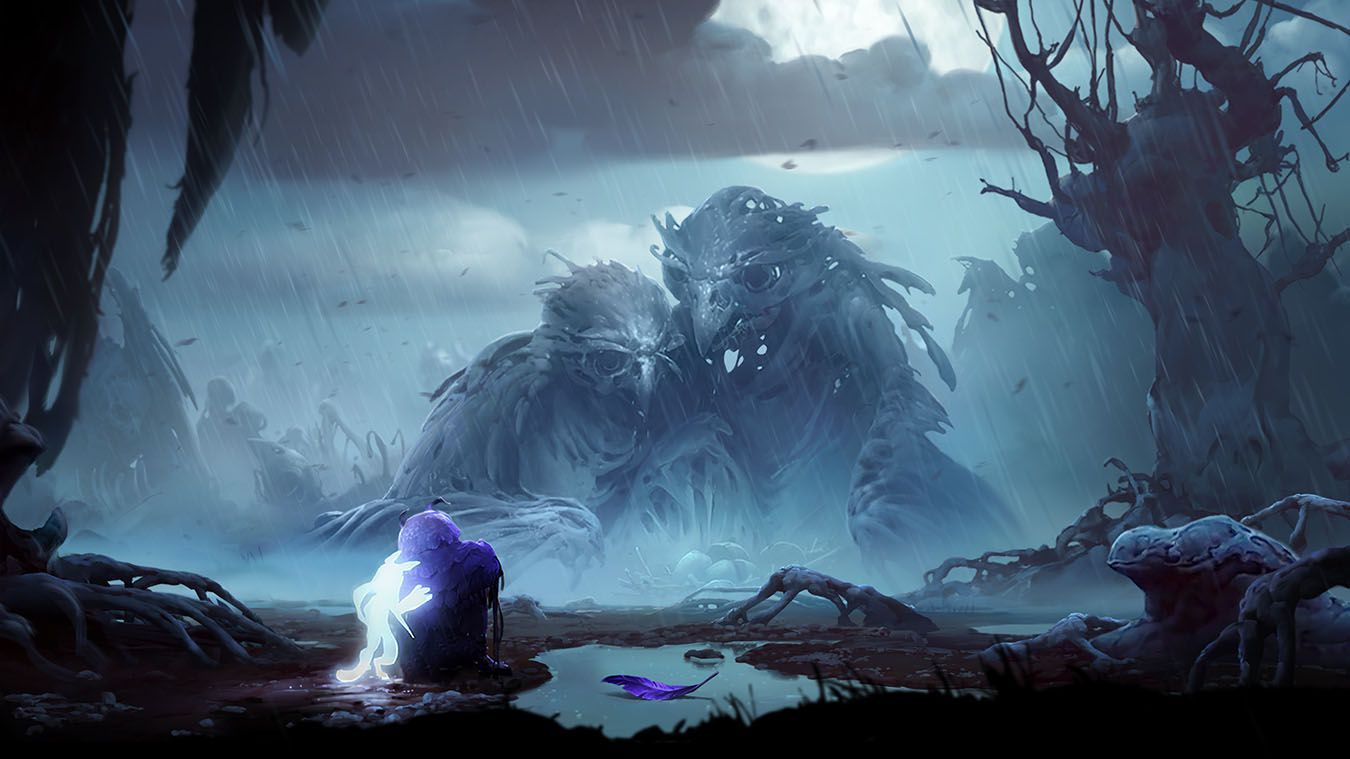 The story is so touching and emotional.

In the path, Ori meets meet with some interesting characters that, despite the minimalistic story of the game, are very well developed and completely stay in your mind. One of the interesting points of characters in Ori and the Will of the Wisps is that we don’t have completely dark and evil characters. The main antagonist of the game is an owl called Shriek. Despite his wrongdoings throughout the game, the game shows you his past, and you can completely understand that Shriek is not a purely evil character. He is a creature that changed due to the cruelty of other animals to him because he looks completely different from other creatures. So they banish him from their society. The game ultimately shows that we cannot always blame evil-doings to a person, and the community plays a fundamental rule in the future actions of everyone. 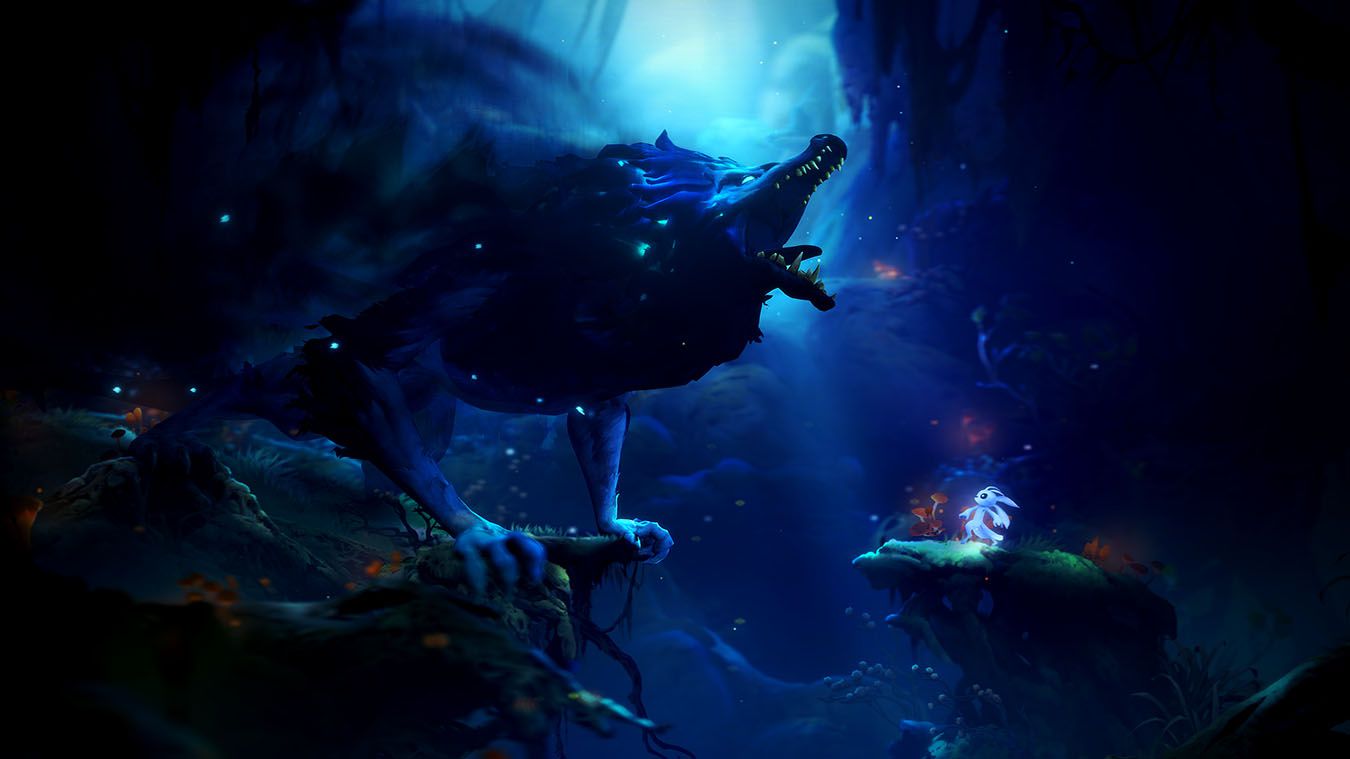 There are lots of intense moments in the game.

The game success to create very emotional moments that can make even the stone-hearted players shed a tear. Moments of losing a friend, mixed with stellar music of the game, can make you feel unhappy. There are also moments of happiness that create a perfect harmony with those sad events and make the game story, a simple yet exceptionally well written and developed journey.

After the story, we analyze gameplay. As you may know, Ori and the Will of the Wisps is a Metroidvania game. Metroidvania games are known for many gameplay mechanics. Still, one of the most critical aspects of their design is that they usually have a big over-world that is divided into different parts. In each section, you will find some abilities that let you discover parts from past areas. These dynamic increase of skills that gradually make you master the game elements and use them fluently and precisely are the core elements of the genre, that is, in my opinion, makes well-made Metroidvania games, artwork in game design. 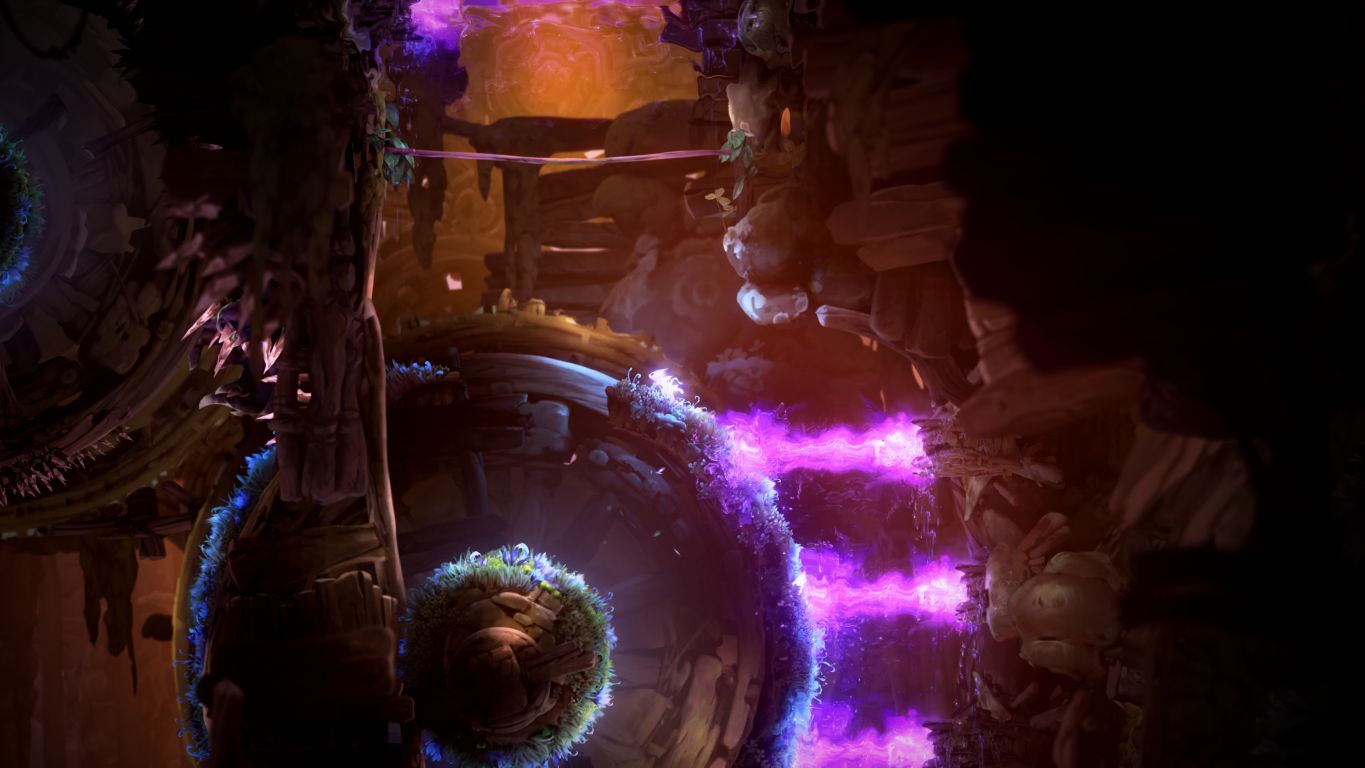 If you agree with me that Metroidvania games can be a piece of art in game design, then Ori and the Will of the Wisps is an absolute masterpiece. Every element of the game is at the right place and at the perfect time. You gain abilities in a very well designed order. Some of them can be gained in parallel, but these abilities are so interconnected with different parts of the game that delivers a cohesive experience to the player. 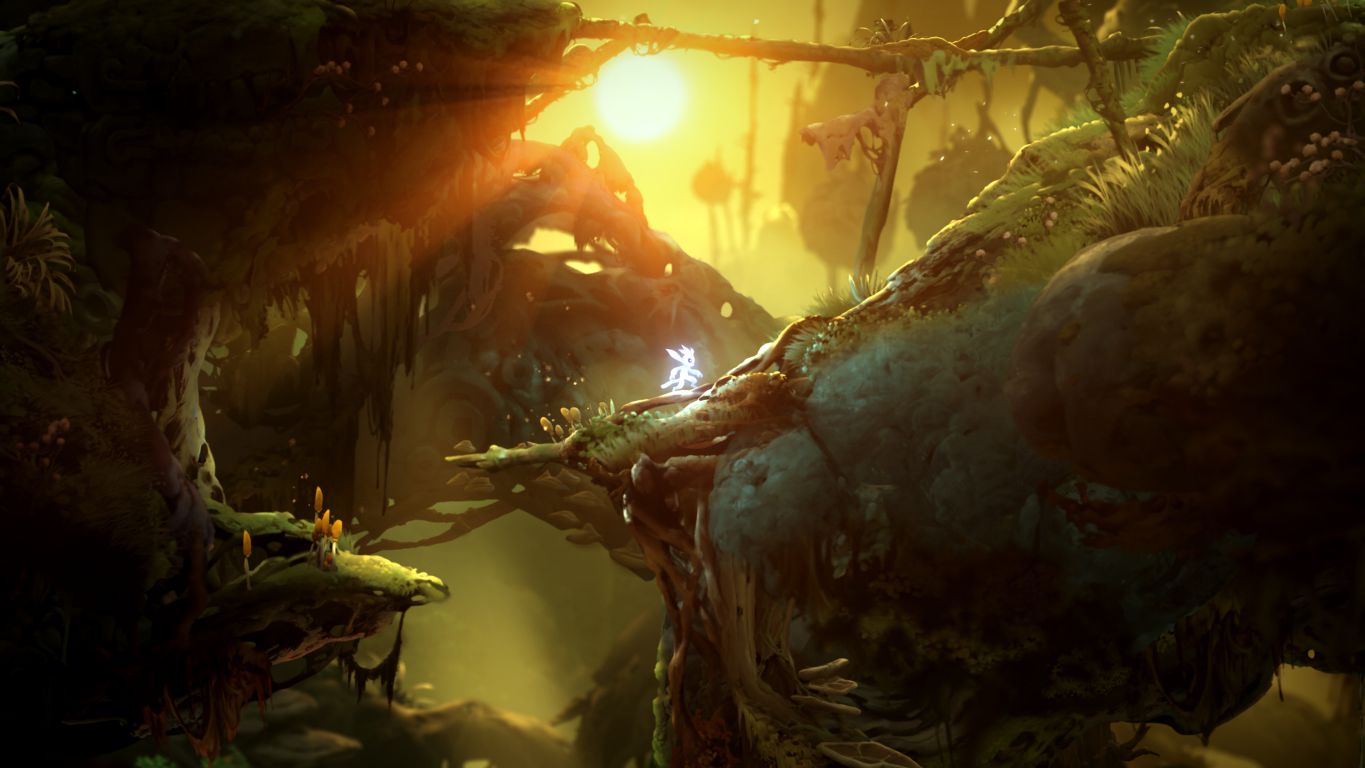 You will accompany Ori on a long journey, and you will face lots of challenges and difficulties. 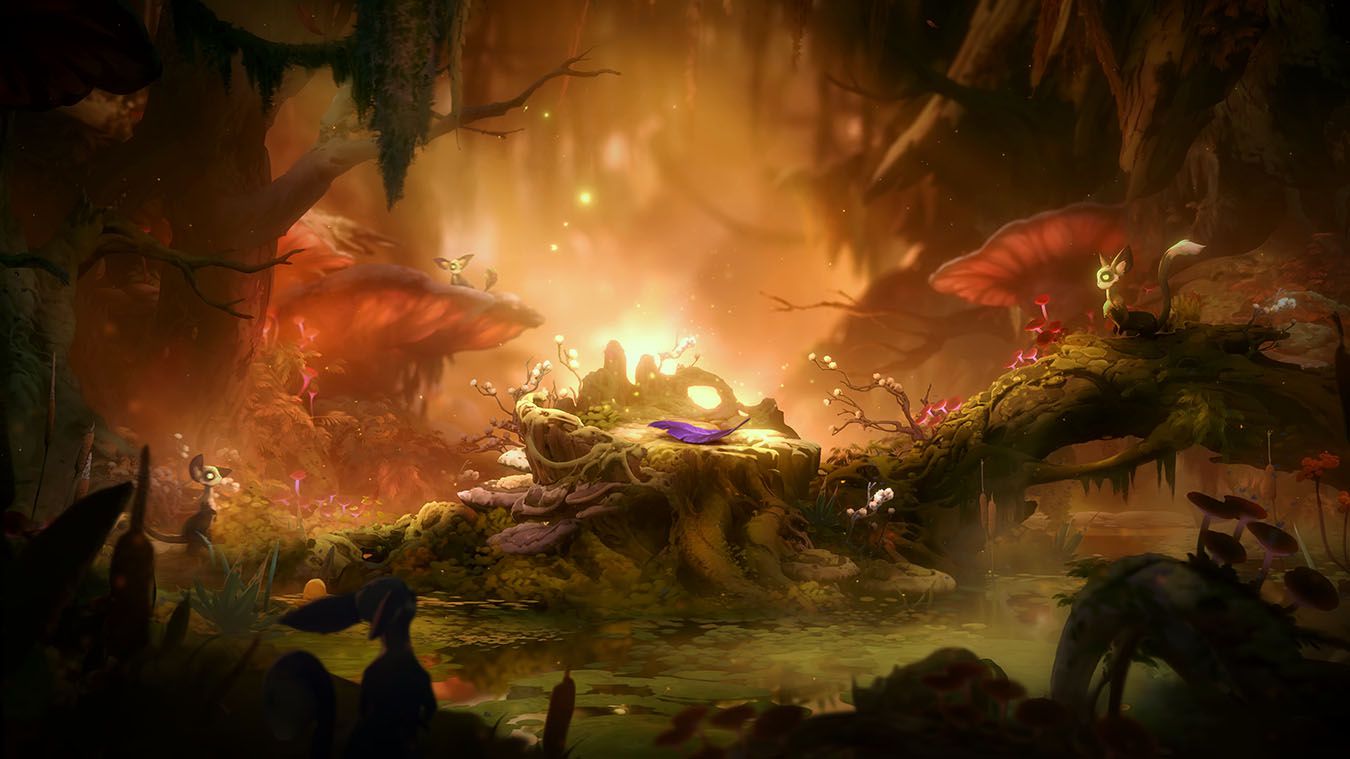 It is impossible to describe how beautiful this game is.

One of the most important mechanics of Ori and the Will of the Wisps is its platforming puzzles. It is essential to design clever puzzles for every ability the player can gain in the game, so for completing the game one hundred percent, you need to master every skill and use them intelligently to access unreachable areas. The game is a perfect balance of these types of puzzles. You can proceed in the game with average talent, but if you want to see every corner of the game and acquire every item and upgrade, then you must master every aspect of the game’s mechanics. 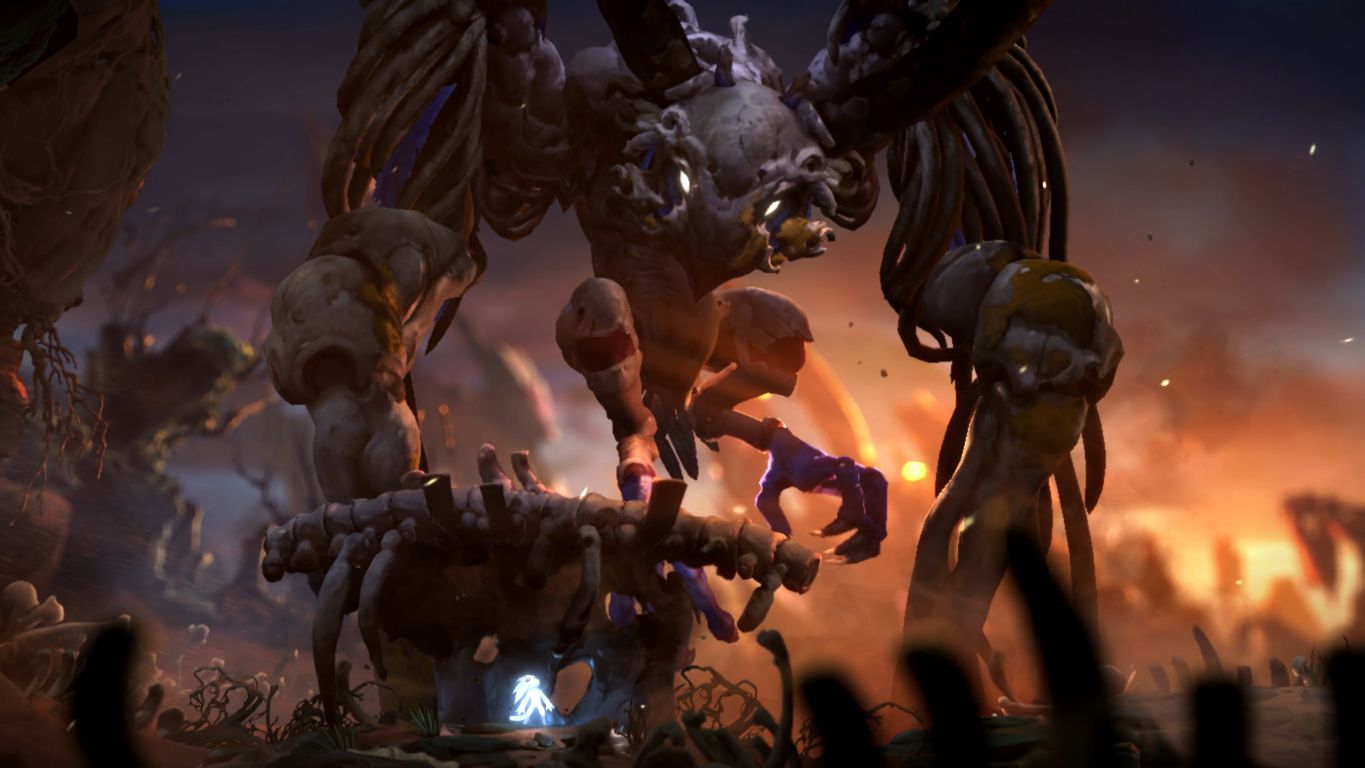 Shriek is the main antagonist of the game. He is a very well-written character for a game with a minimalist story.

Another part of the game is its combat. The combat has changed a lot from Ori and the Blind Forest. In Blind Forest, you were not the main actor of the encounter, and actually, a wisp that accompanied you attacked the enemies by your command. The development team perfectly executed its mechanics, but it felt somehow passive because the character you directly control had little impact on the main course of the combat. So, developers decided to change that combat system, and in Ori and Will of the Wisps, Ori can directly attack enemies using a type of blade, hammer, spear, and bow. They made the game’s combat a lot more fun, engaging and active. The enemies have more variety, both in visual and functional design. Things like blade, hammer, and bow also have usages in the platforming parts of the game and are not simple things just for pure combat, so developers deepened platformer aspects of the game and killed two birds with one stone.

At all, Moon studios succeed in achieving an astonishing achievement in Ori and the Will of the Wisps. The game improves the almost-perfect gameplay mechanics of the previous installment in every manner. It has better level design, more engaging combat, and it also has more exciting escape scenes that genuinely test your mastery in gameplay mechanics. Anyway, this game offers one of the best and smooth Metroidvania experiences in the history of video games. 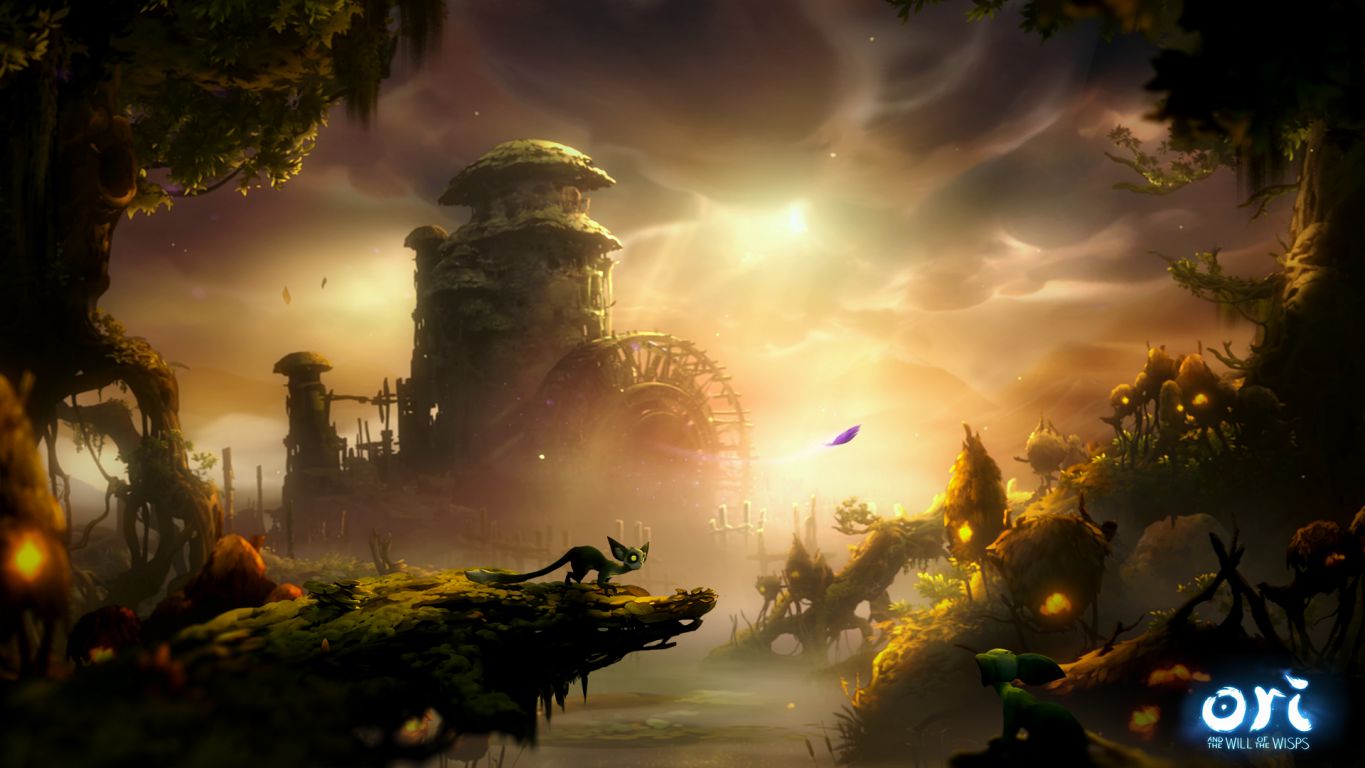 After gameplay, we come to the graphics. As you can see in the pictures of the game, it is a masterpiece. Every scene of the game is a very detailed painting that is tailored with love and art. The game offers one of the most impressive visual experiences not just in video games, but in all the entertainment industry. There are lots of environments in this game, and all of them consist of spectacular perspectives and art design that can nail you in front of your monitor. It is noteworthy that except fast travels, the game has almost no loading screen. Even fast travel is done using a smooth transition that doesn’t look like a loading screen. Unfortunately, I encountered some game freezes and lags on rare occasions on PC. I believe most of them are by now, but it could slightly affect the overall experience of a player.

At last, we come to music and sound. It is needless to say that Ori’s music and soundtracks are magical. They are filled with emotions and put you in the very moments of the game. Gareth Cooker did an outstanding job in composing soundtracks for this game. Despite that the game has no real language dubbing, it features exciting and funny sound for its creatures, and also other auditory elements like ambient sounds, sounds of combat, etc.… are all at the very best quality. It is noteworthy that there were some problems in terms of sound getting distorted in early PC versions but got fixed very soon. 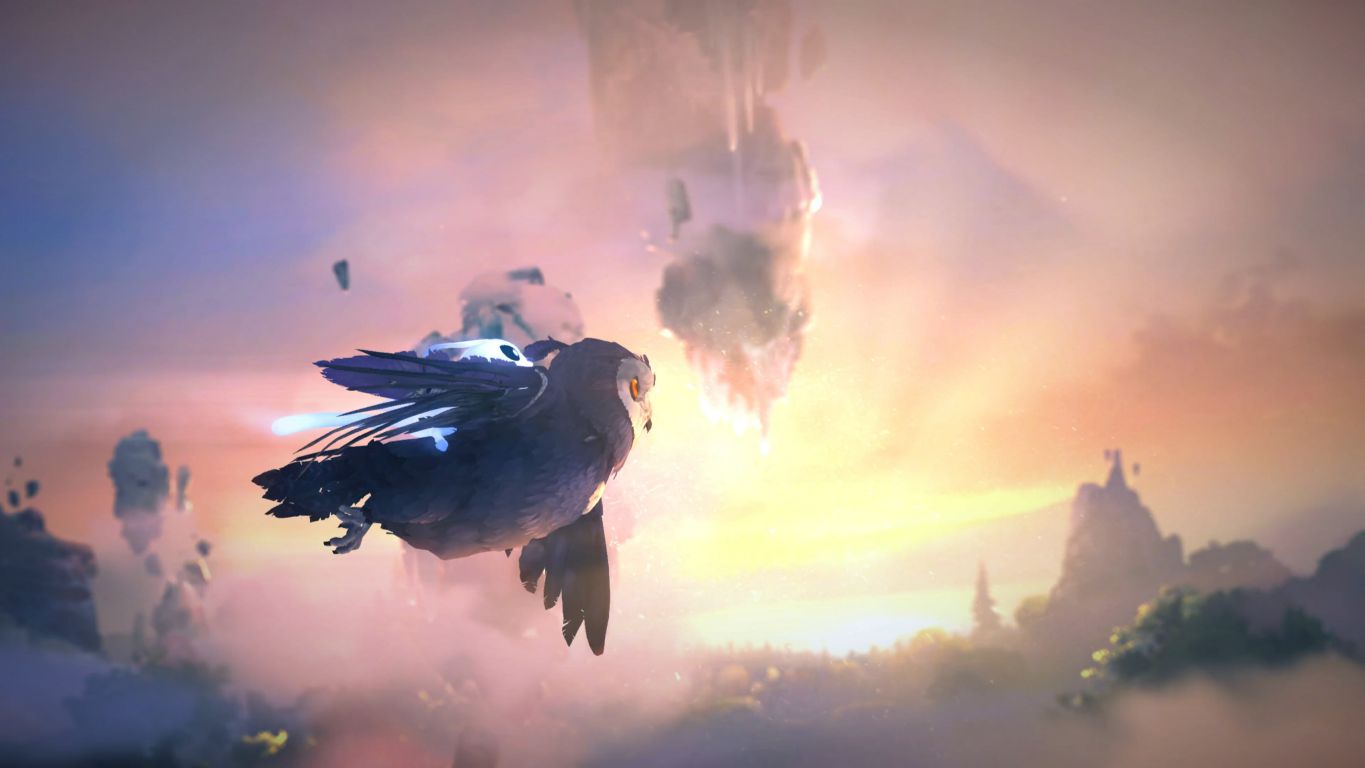 Ori and the Will of the Wisps

Ori and the Will of the Wisps is one of the best Metroidvania games ever made. Developers managed to create an experience that is greater and more enjoyable than most AAA experiences. Every scene of this game looks like an artwork, and every element of Ori and the Will of the Wisps’ gameplay mechanics are at their best. It is one of the games that prove video games are a form of art. It is a must-play for everyone who likes video games.

Tags: Microsoft Game Studios ، Moon Studios ، Ori and the Will of the Wisps ، Platformer ، Xbox