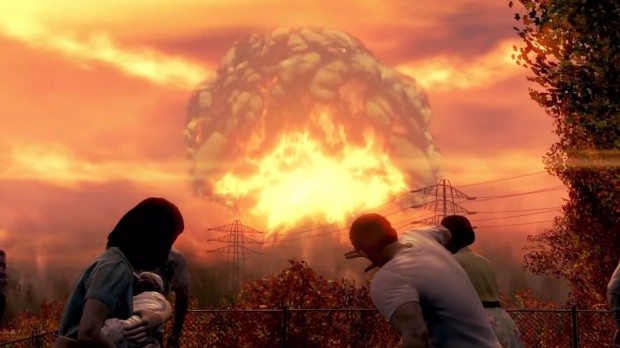 Bethesda is fully in the process of promoting and pushing Fallout 4 as much as they can; recently, they had a presentation for the game where they showed off more of it, including aspects that we had never seen before. In an interview with PC PowerPlay, they elaborated a bit more on those things

For starters, they confirmed that having Fallout 4 look more colorful and less bleak than Fallout 3 was meant to be a conscious decision.

I think it was a conscious decision, I think the team was very self-aware that Fallout 3 was a depressing-looking world, but that was part of the motif that they were going for, which is, you emerge into this world having lived in the vault and it was very much, your father is on this quest to save humanity.

Like, humanity needs saving. Look at all this. It’s horrible. Somebody has got to do something. This has got a slightly different tone to it. And not specific to the story, but just, the mood of the world is more of a, this is life, like, this is normal. This is reality now. There is no more nicely manicured lawns or white picket fences or going back to that. This is what home looks like now.

He also discussed the S.P.E.C.I.A.Ls in this game, since they apparently work a fair bit differently than the other games in the franchise, and there has been some confusion regarding how they work. It does sound like a slightly more complex version of the way leveling worked in Skyrim- you have your specials, which are basically the columns, and then the rows are the different levels of that S.P.E.C.I.A.L.s. So when you have a S.P.E.C.I.A.L. that has at least a one, you can unlock the perks in the one row.

He also confirmed that the beginning of the game as it was shown off at E3 was the beginning of the final game as well, that means there are no quests before that. “It’s really to establish who you are and the world that was and the relationship you have with your spouse and your child as you move into the rest of the game,” he said.

Fallout 4 launches this November on Xbox One, PlayStation 4, and PC.