After the release of XCOM, Tactical Strategy/RPG games have grown in popularity, and therefore, we see lots of new games in this genre. Lots of these games share a similar story-setting to the XCOM and feature aliens or set in a modern semi-realistic world. Fort Triumph is broke this tradition and features an entire fantasy world. Stay with us for a review of Fort Triumph.

We start the analysis with the story. There are four races in the game: Human, Goblin, Undead, and Forest Utopia, and each of them has a dedicated campaign, but you can only start the game playing as humans. Fort Triumph is a strong castle in this game that works as a hub for good heroes to stand against evil. In the first minutes of the game, goblins perform some nasty actions that catalyze the game heroes’ movement to stand against the evil forces. 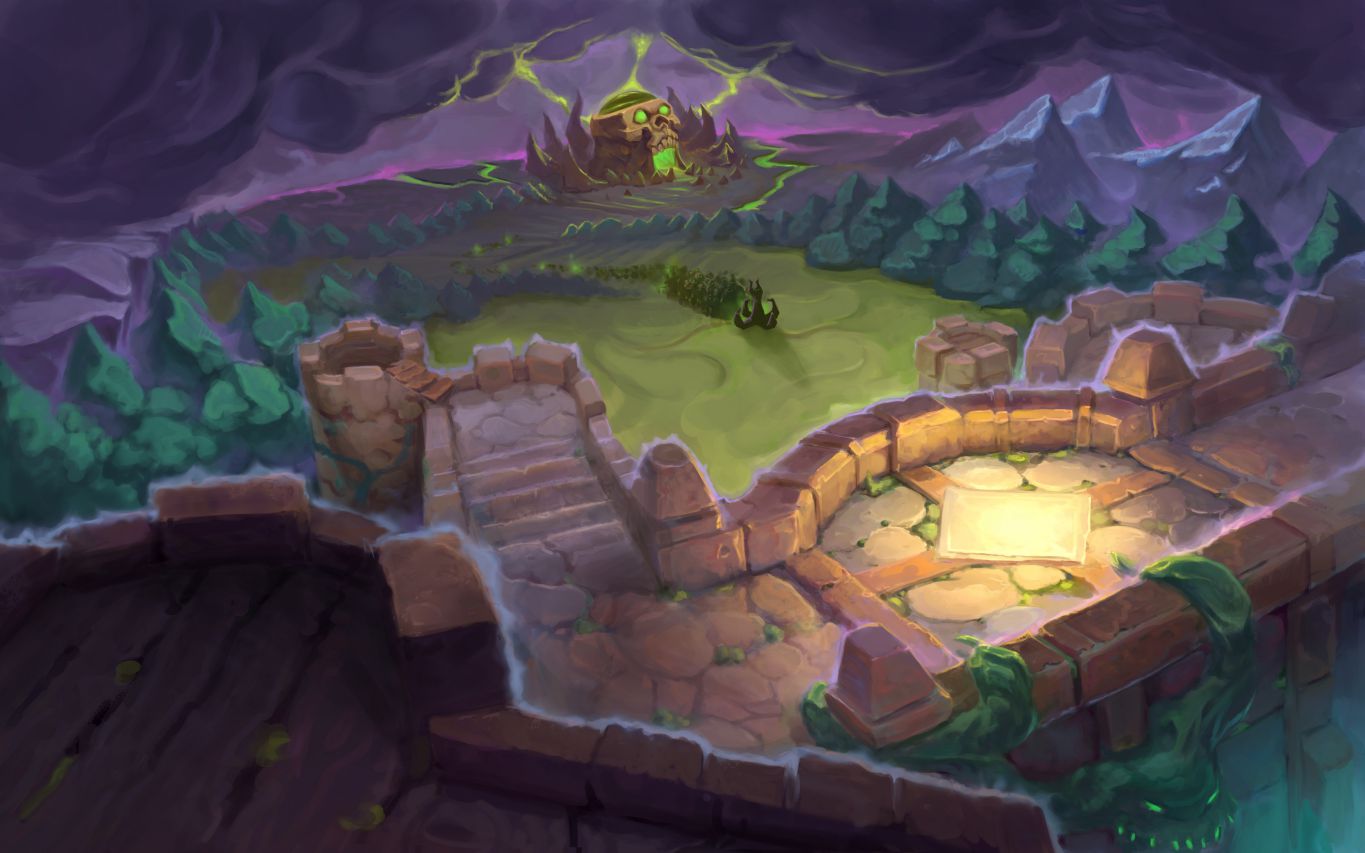 The game features a decent and acceptable story-line. Still, storytelling was not the primary concern of developers because it is mainly predictable and, at the same time, hard-to-follow in some parts. Despite these flaws, humor is one of the well-implemented parts of the story, and there are lots of fun and well-written dialogues full of references to other fantasy books and games.

There are still some weird story elements that make some parts of the game somehow irrational. For example, the game features permadeath, and you will lose your heroes if they die in battle, but interestingly, you can get another hero like your lost one that has a complete history of what happened and can continue his dialogues afterward, and permadeath acts only as a skill reset system. One can think of better and more rational and sensible ways to implement a skill-reset system that doesn’t need this weird replacement system. These problems are somehow immersion-breaking for a game like this and could be handled with smarter methods. 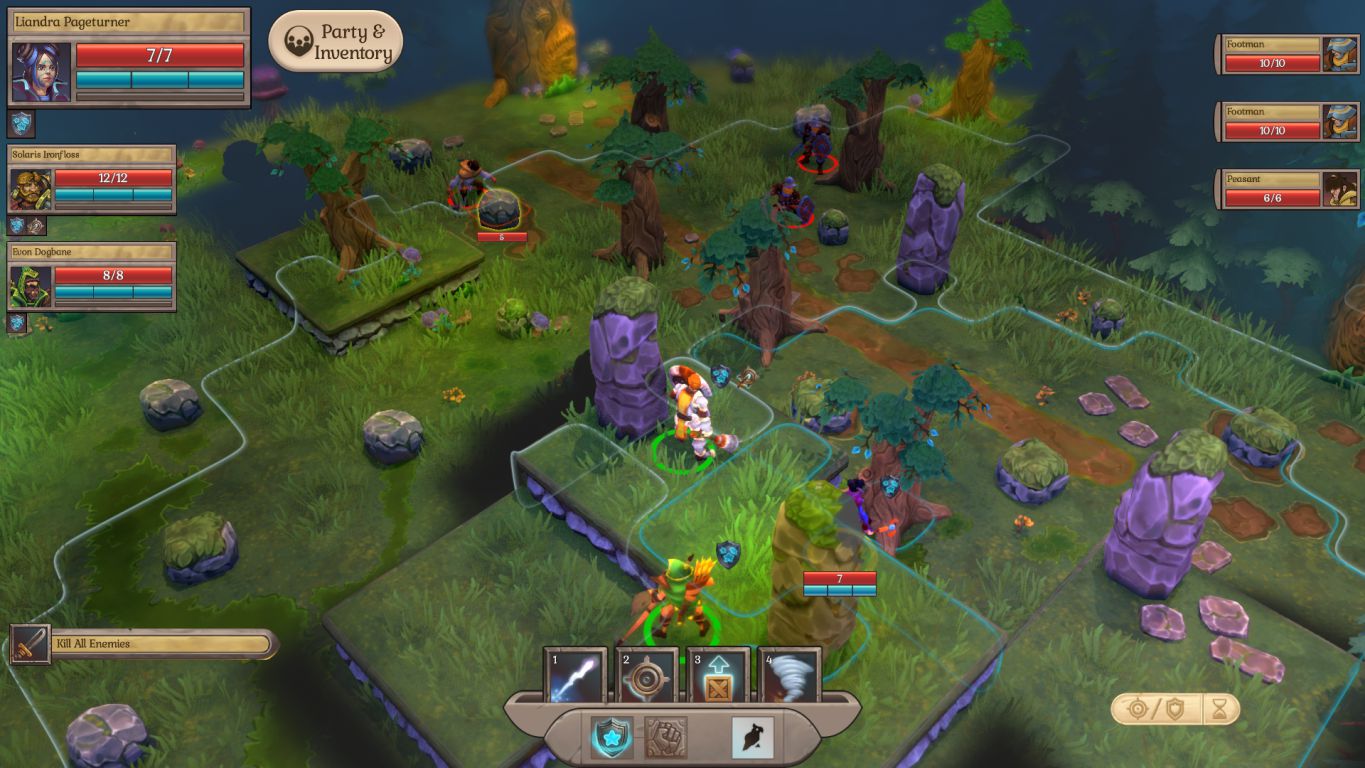 No cover is completely safe

Anyways, we can say that Fort Triumph is an acceptable Tactical Strategy game in terms of story. It has some flaws and irrational decisions that are irritating. Still, the overall experience and proper use of humor and references to other games help the story be at a decent quality.

In terms of gameplay, Fort Triumph consists of two different parts. One is the tactical combat part, and the other is related to management, upgrading, and map system. At first, we talk about the more exciting part, which is the combat. 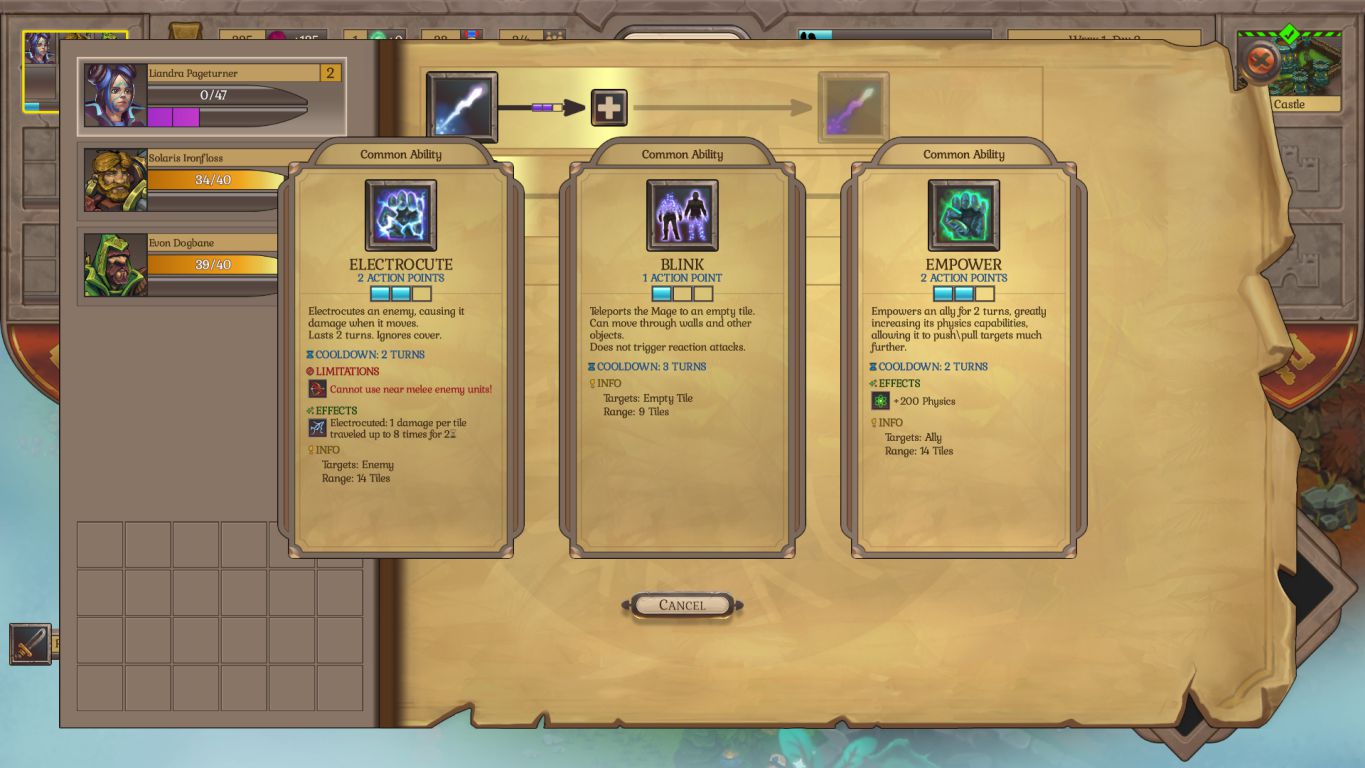 As we mentioned in the first paragraph, the game is like XCOM, and the essential thing that defines this similarity is combat. The most obvious thing in the game is that you and the enemy have separate turns. In your turn, you can move your units and use their abilities in any order that you want, and after you end the turn, the enemy will do these actions, likewise.

If a game wants to be successful in this genre, it should not be a straightforward and complete imitation of the AAA games and should implement some new aspects into the gameplay. The first exciting part of Fort Triumph’s combat is its character-class system. Other video games in the genre mostly have a class system, but because most of them are not set in a fantasy world, the class system is not so tangible. In Fort Triumph, there are classes like a mage, ranger, paladin, and savage, etc. that have fundamental differences. Mages can use different spells to damage enemies and help allies, while paladins are completely melee-focused units and should take the risk and face the enemy from close-by. In addition to these, each race has different attributes and abilities that improve the gameplay complexity and fun.

You can upgrade your base.

The most significant innovation of Fort Triumph is in terms of the physics system. Almost all of the game elements like rocks, trees, pillars, and all the other things are dynamic physical entities that can be manipulated by strikes and magic. For example, you could make a tree fall on the poor goblin standing near it by attacking the tree. These physical effects are not limited to these simple actions, and they can interact with each other, throw a large rock by attacking, and if the rock collides with a tree, the tree may fall on the enemy. Also, you can use some of your abilities to move the enemies using this physics system, and if this enemy clashes with another one in the path, they will both get some damage. You must also note that the enemy can also use this system, so you must be very careful and place your units wisely. 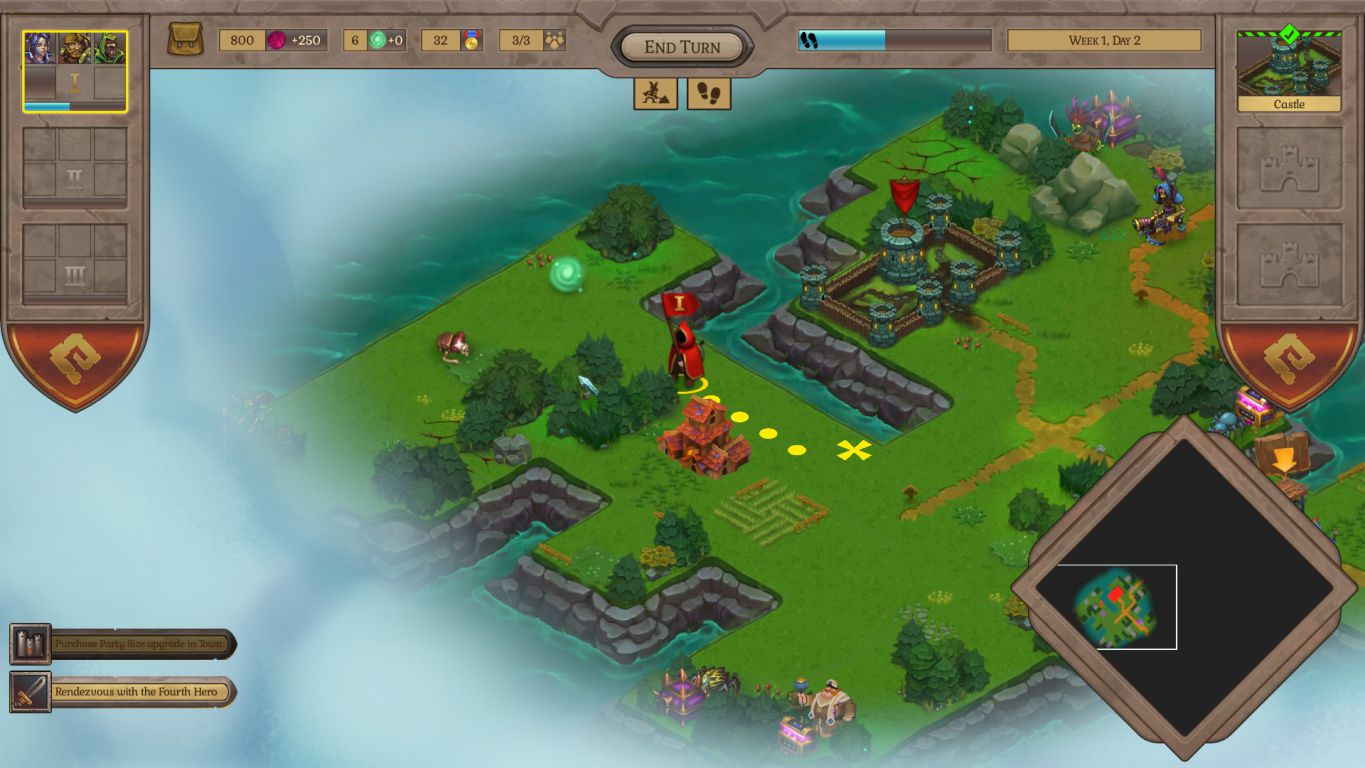 Non-combat parts of the game are inspired by Heroes of Might and Magic.

This Physics system helped a lot to make the game feel unique. Without this system, Fort Triumph could have reduced to a simple clone game, but with this system and all the opportunities it creates, we now have a dynamic and engaging game that makes your choices impact directly on the combat flow. Unfortunately, this system has some problems that prevent it from being perfect. Combat areas are procedurally generated, and sometimes, there are not enough elements to use this system in a meaningful game. I don’t mean that all of the areas are bland, there are still a lot of the well-designed regions generated in this way, but if you’re unlucky, you may encounter poor-designed areas consecutively. It is always a trade-off between hand-designed perfect areas and using procedural generation, which has a chance of creating not-so-good levels. Some developers succeed entirely in overcoming the procedural generation challenge, and almost all of these random levels feel good, and some other, ultimately fail. Fort Triumph developers didn’t succeed totally, but they didn’t fail either, and they are somewhere in-between.

Another important thing is the skill system. Whenever you level-up, you can strengthen previously gained skills or take one of the three random skills the game offers. Fortunately, developers implemented this random skill suggestion system pretty fine, and most of the time, it provides excellent and practical skills that can make different opportunities for your heroes.

Another aspect of gameplay is the management and map system. In the main map, you could control three units, which can consist of three heroes separately. These movements are also done in the turn-based system, and after your turn, other units on the map can move, and some events may happen. You can search the map to find valuable resources that can be used to upgrade your base to get better equipment and make you heroes stronger. If you encounter enemies in this map, you can initiate combat, which will take you to another area designed for battles described in previous paragraphs. These parts of the game are based on the mechanics of Heroes of Might and Magic, and the developers succeeded in making a similar good experience. The game’s humor is still present in this part. For example, one of the game’s currencies is Beetcoin, which is an apparent reference to Bitcoin.

The last aspect we analyze the gameplay is related to AI. In a tactical strategy game, it is crucial to have a reasonable AI, something that is not extremely harsh that makes the game impossible, and at the same time, it must not be too easy that can be beaten without any effort. Fort Triumph’s AI is at an acceptable level. It is not perfect, and wrong moves happen from time to time. But these errors don’t degrade the overall experience of the game and are acceptable. 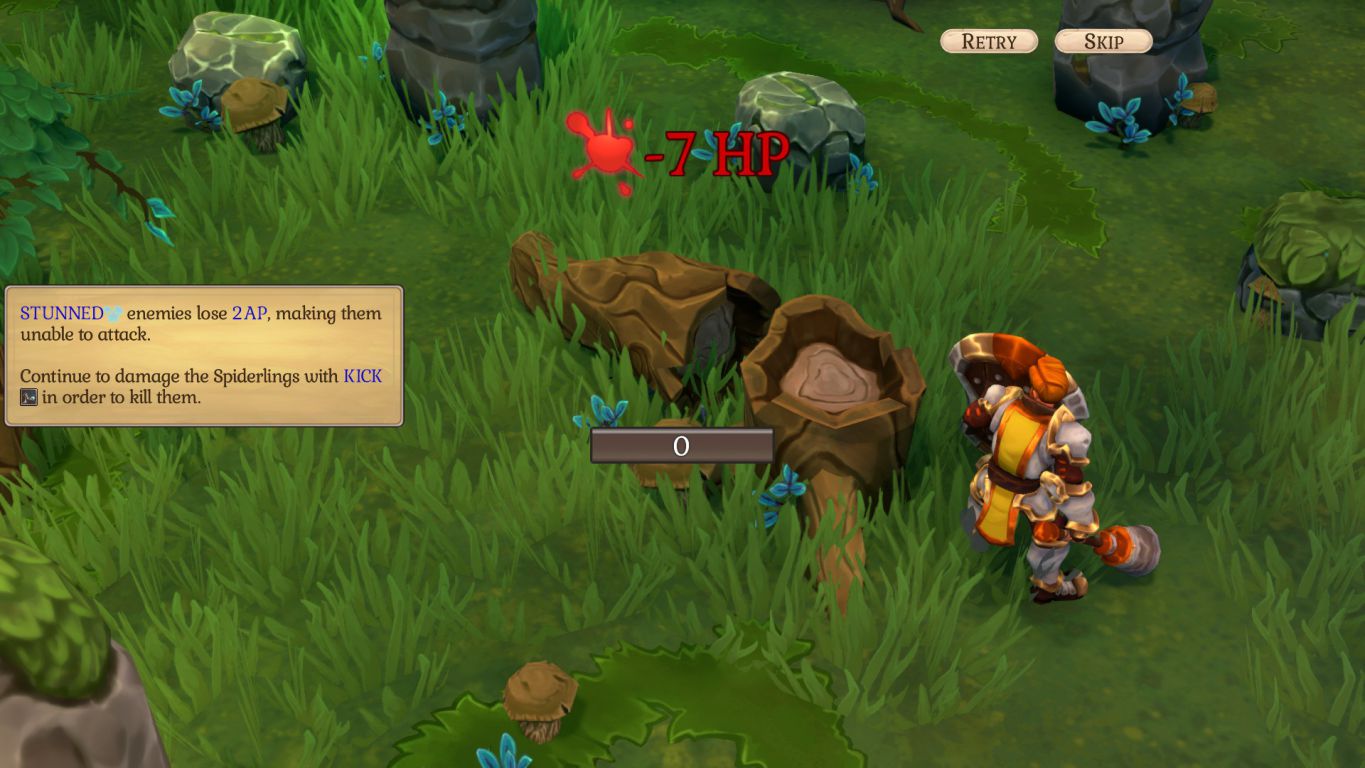 You can kill enemies by using the game’s physics system and manipulating different objects.

After gameplay, we speak about graphics. From an artistic perspective, as evident from the game artworks and screenshots, we have an excellent game. Despite some generic-looking enemies, the overall art design of enemies, locations, characters, and other aspects of the game have been done very well. Customization options are somehow limited, which is a negative point for a game in this genre. In terms of technical aspects, the developers did an excellent job of implementing the game’s artworks into a 3D world. Unfortunately, I encountered some lags and frame drops with a strong PC build, which is not a good sign, because technically the game doesn’t look demanding and should have been optimized way better. 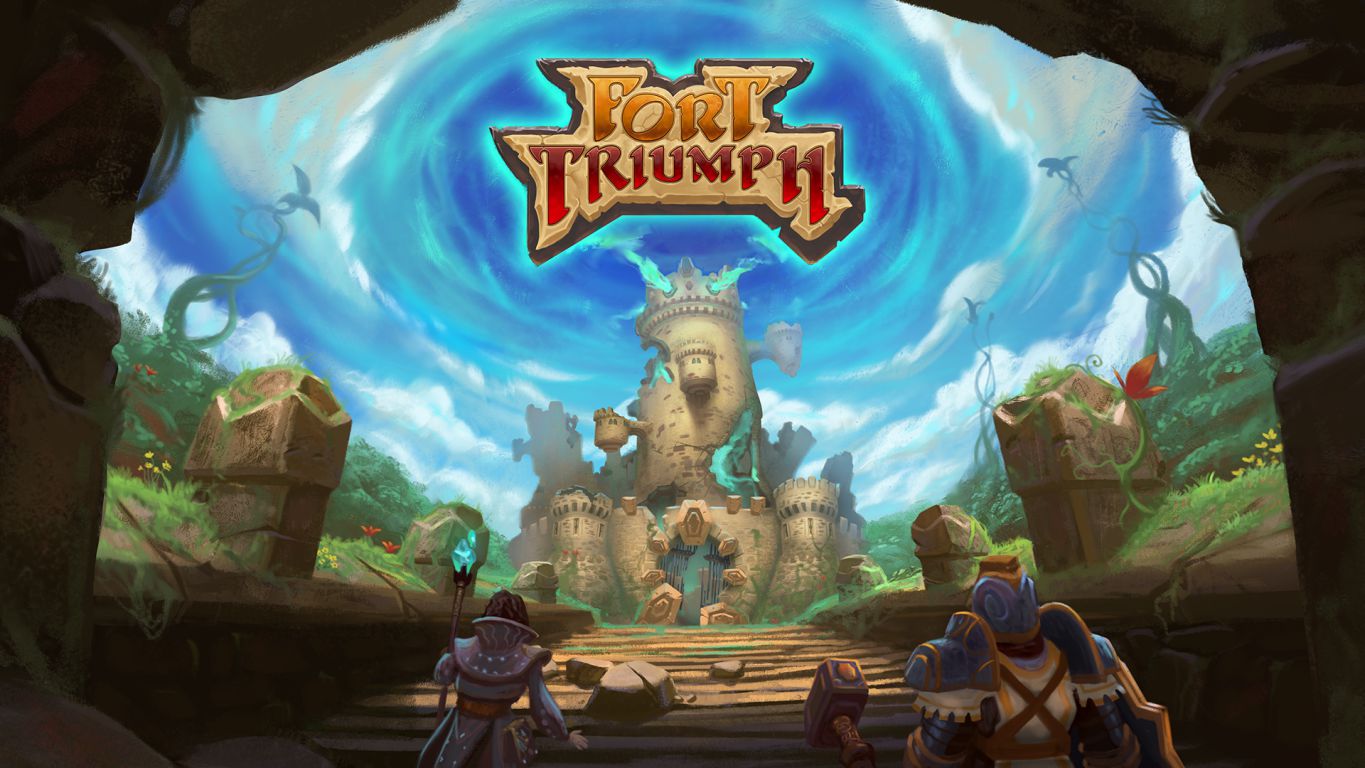 At last, we come to music and sound design. Soundtracks used for Fort Triumph are entirely in harmony with its fantasy theme. They are not at the level of AAA fantasy games, but the overall quality is acceptable. In terms of sound design, the game uses good sound effects for different things like sword clashes, falling trees, etc. Unfortunately, the game is not fully voice-acted, and only the main narrator is completely voiced.

Fort Triumph is a well-made Tactical RPG game that mix fantasy elements with turn-based combat of XCOM, some aspects of Heroes of Might and Magic, and parody, and the result is an enjoyable potion. If you enjoy games like XCOM, Fort Triumph will be the right choice for you to experience the gameplay charm with fantasy elements.