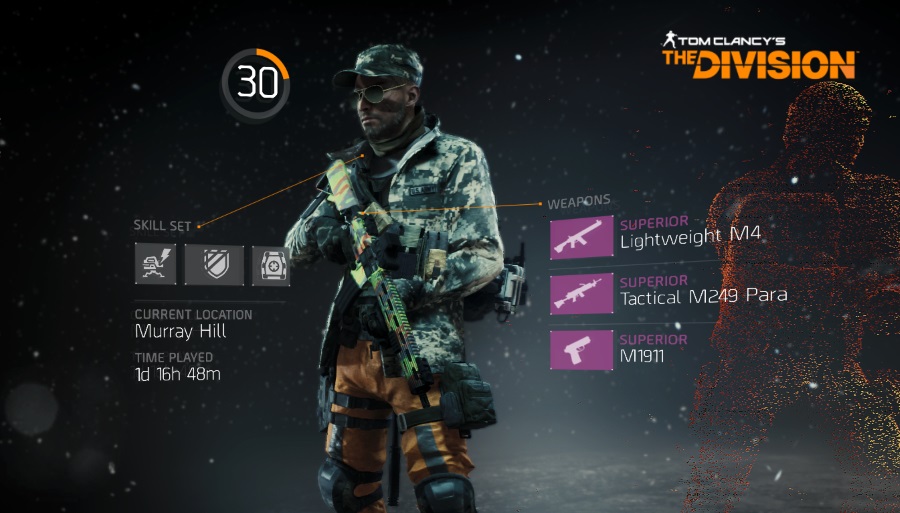 When the campaign ends the end game begins.

The Division has a level cap of 30 for its play outside of the Dark Zone. I hit it after just over 40 hours. Did it feel like a grind?

I started The Division as I’d imagine most players did. Running around kicking off encounters, side missions, picking up cell phones, grabbing any weapon and gear drops and flicking through my inventory for an extra percentage of damage. It was all a bit “headless chicken”, but it worked and got me comfortable with the game.

Around level 8 I began to focus on the campaign missions because I could see how much XP they handed out. But then I felt a little underpowered in-terms of weapons even if my level was adequate. So I shifted to hoovering up as many drops as I could, and selling everything for some powerful Specialised blue guns. There was a little crafting involved, but I found that getting blueprints, breaking down weapons and scavenging other parts seemed too fiddly and convoluted for me. I just snatched up everything and sold it all in bulk to buy a blue AK-47 and a SCAR. I left nothing on the table.

Once I felt strong enough (as opposed to just being at the right level on paper) I approached the campaign missions with at least one other player. This is where it really clicked for me. Single missions were giving me enough XP to go up an entire level at a time. I did a couple of those, then moved to a new district, opened the safehouse, completed the side missions and encounters, grabbed the loot and XP, and was high enough to start another campaign mission. I was in the loop, presumably playing The Division how it was designed to be played. I have no doubt that playing co-op really helped here. Playing solo looks masochistic to me. I have no patience or desire to bang my head against a wall.

I moved up from level 15 to 23, 24, 25 just by doing this. I replayed a handful of side missions but not many, so although the general gameplay might seem repetitive, there were at least different settings for me to explore; carparks to tunnels to intersections to arenas to rooftops. Bounties are a favourite of mine, virus research quests the complete opposite. At this stage I was almost exclusively in the bottom and right of the map, working my way up around the Dark Zone.

Around level 23 I started to see Superior purple gear and weapons, so again, sold all the blue stash I’d been hoarding and bought a purple marksman rifle. Then a purple holster. I got a few purple mods as drops, but all four Superior weapons I owned at this point were purchased from vendors. I tried one campaign mission solo and got butchered, but after sleeping on it decided I should switch my perks and try again. I never actually made that change, instead taking my first steps into the Dark Zone and extracted blue gear to sell. I revisited that awkward mission with a co-op partner and nailed it.

It started to feel a lot more challenging at this point. Not cheap, but there were a few occasions where it rained grenades on my head. 28 hours in and it didn’t feel like a grind, just a tougher game. If I wasn’t playing it for work I’d have taken my time a little more, but I certainly wasn’t rushing. People were hitting the level cap in the first 48 hours. Doing it over a week didn’t feel obsessive.

Maybe it’s because the gunplay is so much fun, or the fact that I’m constantly switching up my perks, skills and weapons. To be able to strip your character down and rebuild entirely is a revelation. To be level 25 and can get naked, redressing to become a completely different character – I haven’t ever been able to do that in an RPG before. Getting locked into restrictive class limits feels like old-fashioned game design now. This classless RPG feels like freedom.

Around level 25 I knew I’d have to approach a campaign mission on my own. With no other friends online and no desire to strategise with strangers I followed this solo build guide. It took me 20 minutes to get used to it and then I nailed the Rooftop Comm Relay mission on my lonesome with only one death. Again, I was a completely different build to what I was a couple of levels ago. To celebrate I bought a tiger camo skin for my gun.

“To be able to strip your character down and rebuild entirely is a revelation. This classless RPG feels like freedom.”

At level 27 I felt like I was on the homestraight. There were two campaign missions live on the map for me (I’m still yet to unlock the final safehouse). I did the Russian Consulate mission and then helped a friend on a couple I’d already completed. There’s no extra XP for me, apart from kill XP, but new gear is always welcome.

If at times I push myself and it feels like a grind it’s because I’m purposefully rushing it. That’s not the game, that’s me. It’s important to recognise the distinction there. If I can’t get over a hump then that’s a problem with the game, but I haven’t hit anything like that.

I started the General Assembly mission at level 29-and-a-half. I expected to hit the level cap but what surprised me was that after the big takedown I’d completed the campaign. That was never planned, just fortuitous. I hadn’t payed attention to the story, so wasn’t aware this was the final mission. I wooped. I was chuffed. It was 11pm and my wife had gone to bed leaving me to play in the dark.

So this is it. Level 30. Decked out in all-Superior gear. I never felt like the game was handing me measly amounts of XP for my work. The XP bar in the right hand corner always moved up a considerable, visual chunk. Those yellow numbers springing off the top of fallen enemies didn’t feel arbitrary. I was always moving forward and always able to see the progress.

Now I want to play more. I’m ready for the Dark Zone, I still haven’t been to Mid Town East, and I want to start earning Phoenix Credits and High-End yellow gear. Forty hours into The Division and it’s only just begun. It’s time to start the end game.