Eventually, after about 13 years since the release of the last installment in Half-Life series, Valve decided actually to make a new Half-Life. We’re going to analyze Half-Life: Alyx to find out whether it can come up to expectations we have from a Half-Life game or not. 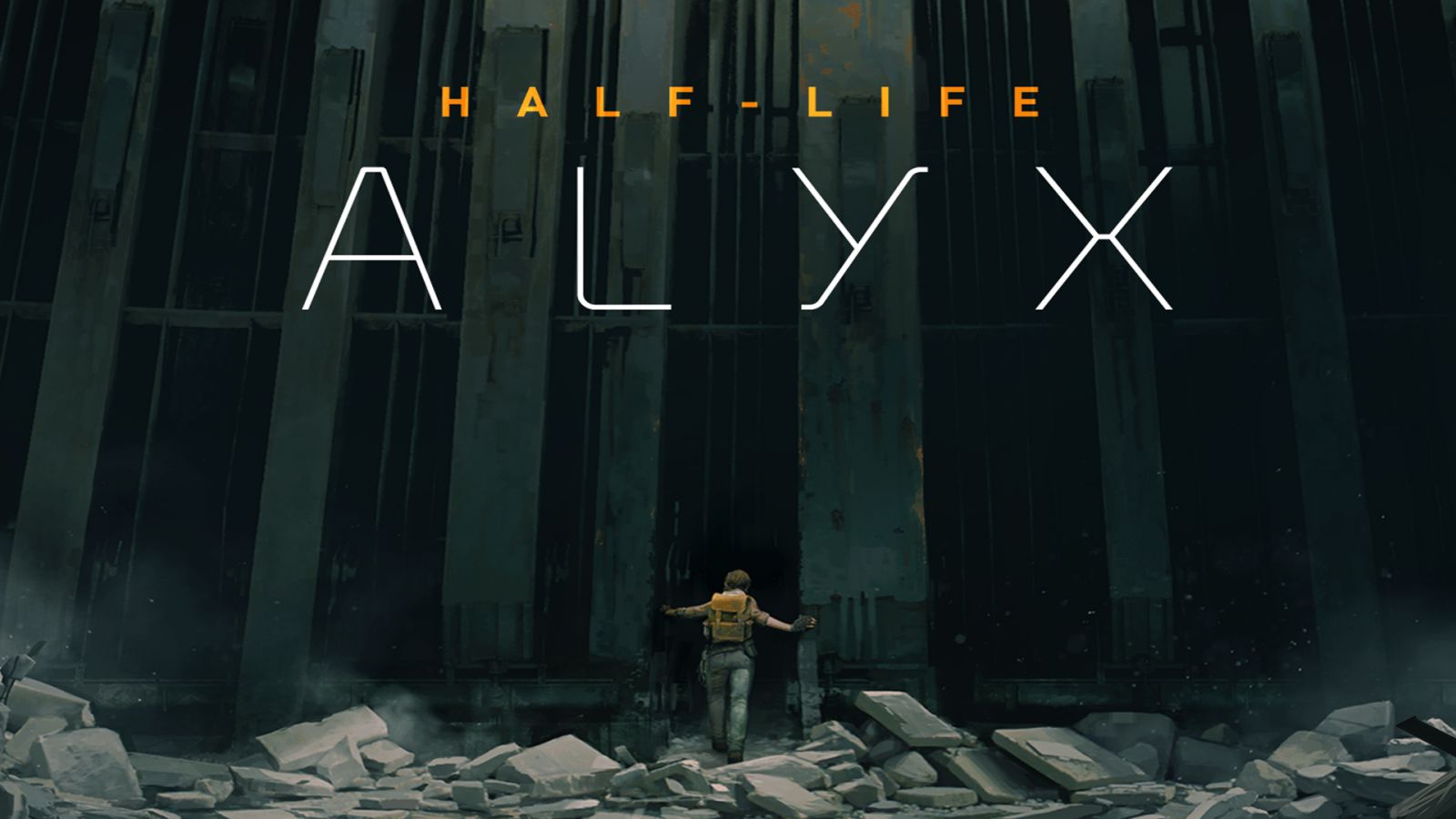 We start the review from the story. Half-Life: Alyx is a prequel to Half-Life 2, and its story takes place between the events of Half-Life 1 and Half-Life 2 and 5 years before the appearance of Gordon Freeman in City 17. You take control of Alyx Vance, which will play an important role later in the Half-Life 2. At first, you will know that Alyx’s father, Dr. Eli Vance, has been captured by Combine forces, and obviously, Alyx tries to free her father.

The first important thing about the story is that despite it’s a prequel to Half-Life 2, you better played other Half-Life games before this because this franchise’s got a very complex and sophisticated storyline. Despite lots of VR games, Half-Life: Alyx manages to have an excellent storyline, and for completely understanding it, you should have been familiar with previous games’ stories. Without playing other games, you may probably not fully understand why characters such as G-Man are very important in the series and lots of other stuff. So despite being a prequel, this game expects that the player has probably played previous installments or at least is familiar with the series’ lore. 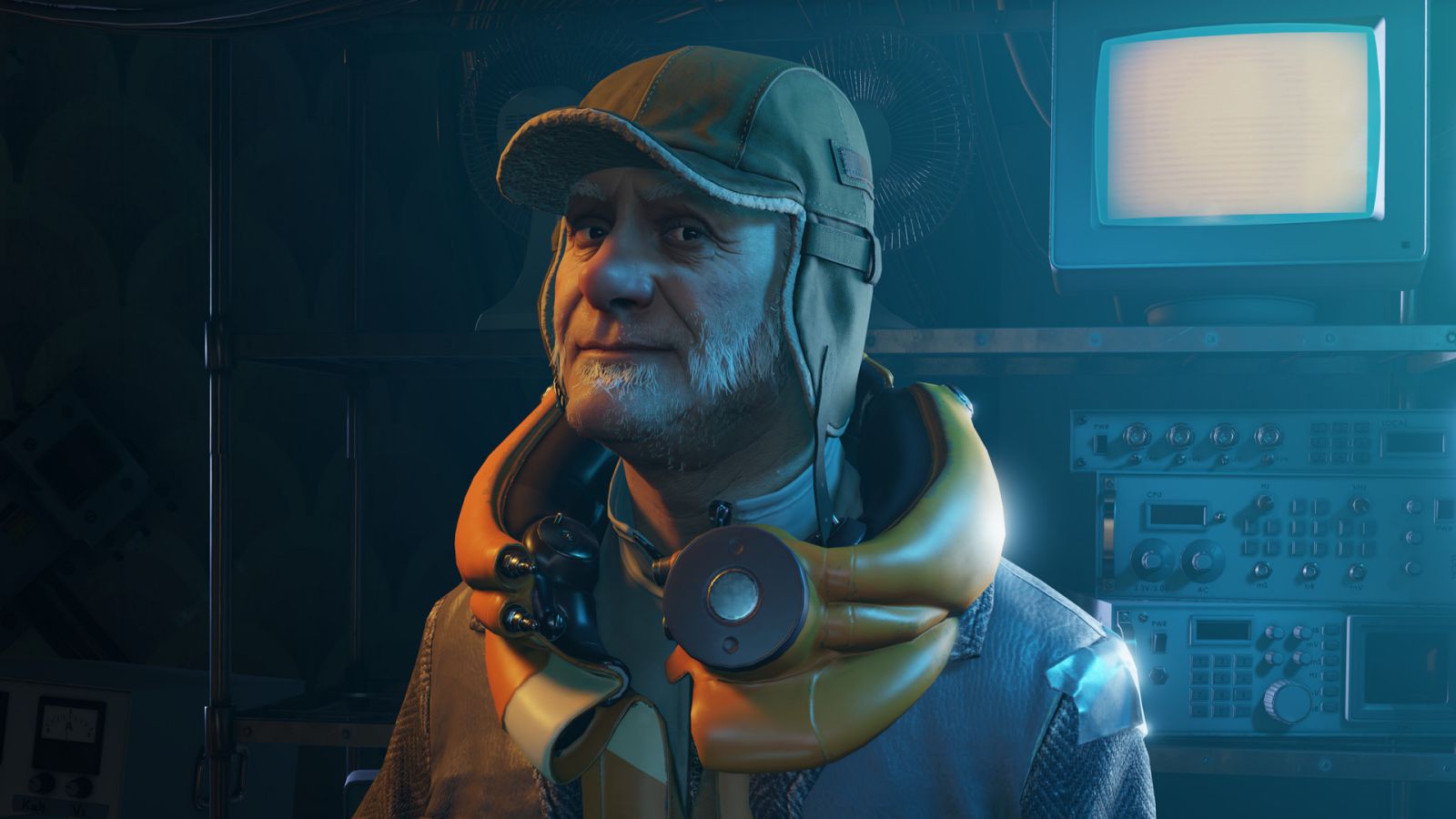 NPCs all have excellent and well-written characterizations.

As I don’t want to spoil the story, I will not get into its details anymore, but I can assure you that Valve writers proved it one more time that they can write engaging, complex, and interconnected stories. Nearly all parts of the story are well-written, from dialogues to the cliff-hanger ending.

After the story, we will analyze the gameplay. As you know, Half-Life: Alyx is a VR-Exclusive game, and it is explicitly designed only for VR Headsets. Fortunately, most VR headsets work fine with this game, and you don’t need to play the game using only Valve Index, which is a pretty High-end and expensive headset. Of course, you can achieve the best experience by playing the game with Index, but as I said before, most other headsets like Oculus Rift, HTC Vive, and even Windows Mixed Reality Headsets work fine with this game, and you can thoroughly enjoy the game. 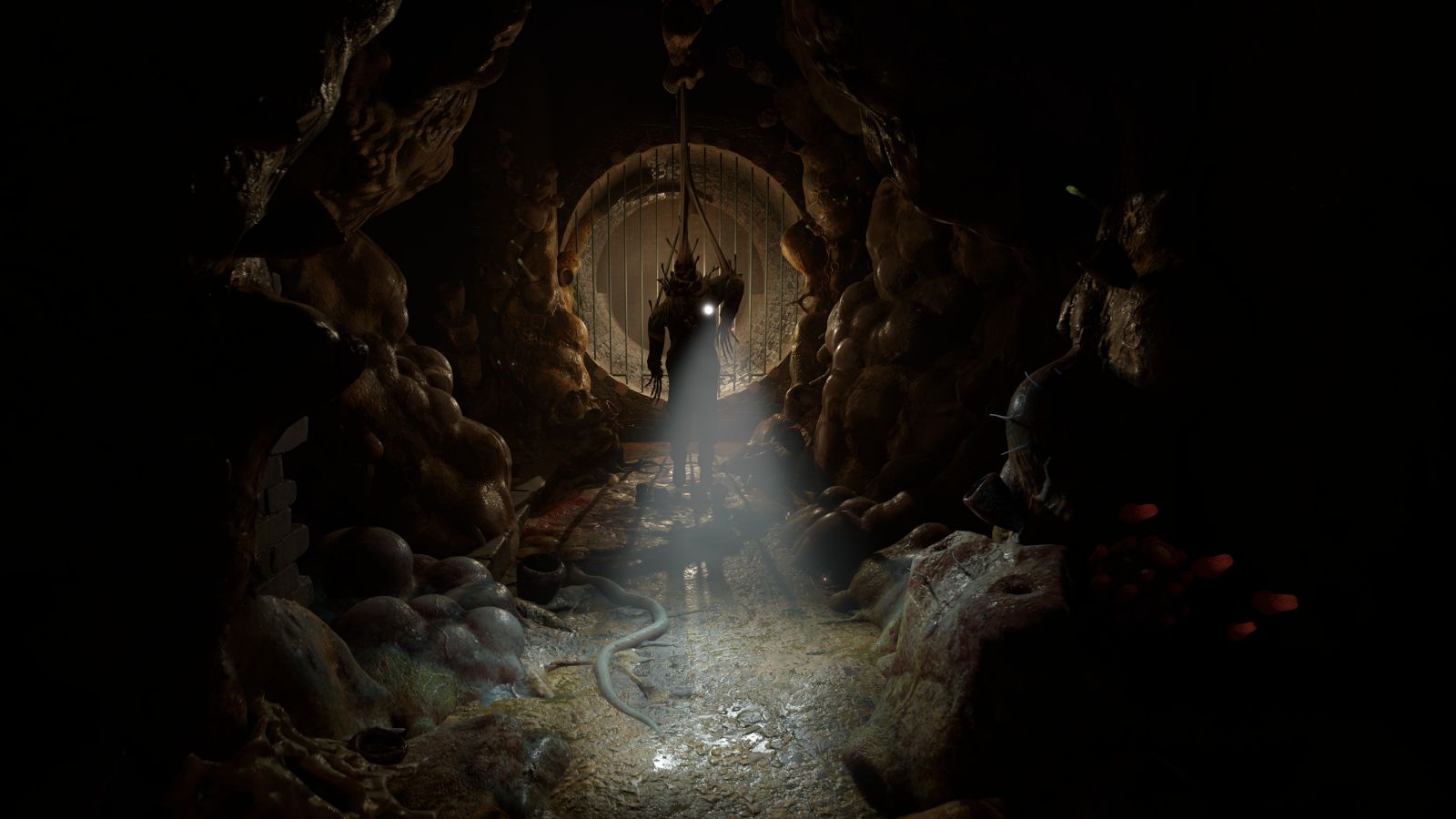 Although we cannot categorize Half-Life: Alyx as a horror game, some locations feel eerie and terrifying.

After starting the game, you will immediately understand that Half-Life: Alyx is not one of those mediocre VR games that are merely experimenting with VR technology without any significant achievement. Half-Life: Alyx is a AAA, high-quality VR game that manages to show how good and spectacular a VR game can be. The game controls, primarily if you use headsets like Index, are entirely responsive and will naturally react to every movement of your fingers. When using a gun, you can accurately aim at the enemies. You can pick up things using your gravity glove and even dynamically play with the game physics and throw them back to the environment, so you will ultimately feel immersed in the game world.

One of the main problems that occur in lots of VR games’ combat is that they are either extremely challenging to play due to very realistic simulation or too easy because lots of assist modes are enabled to make sure the game will not frustrate you. Game designers at Valve really managed to get to a balancing point in terms of combat for Half-Life: Alyx. Its combat mechanics feel very fluid and enjoyable, and you will not have difficulties in terms of control, but at the same time game offers proper challenges, so the combat doesn’t become oversimplified. It is a crucial part of game design that many games fail to implement it correctly, but Valve’s done it entirely in the right way. 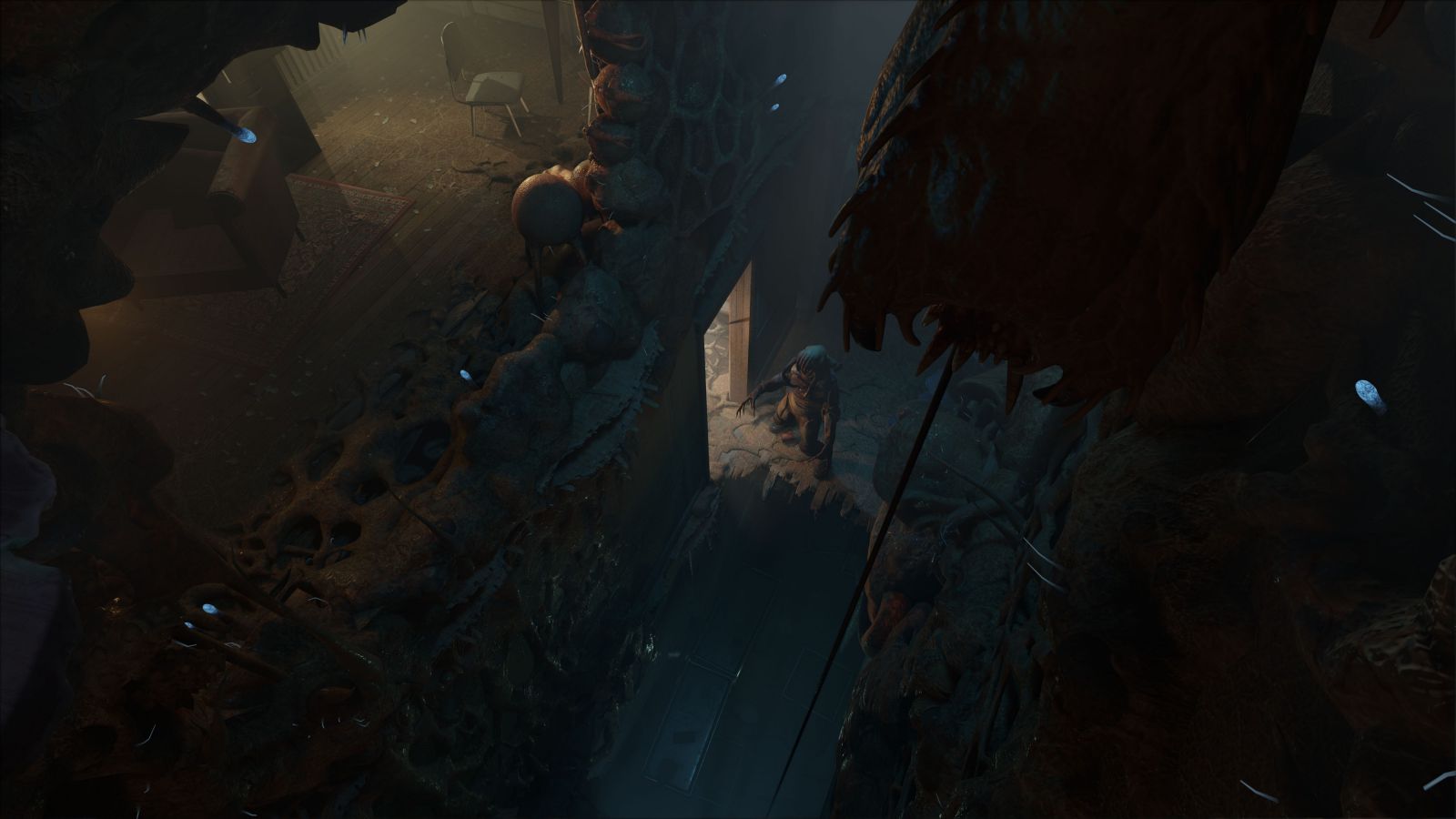 Mind your step in ruined buildings. There may be a Headcrab ambushing for you.

Combat in this game has two dimensions. One part is fighting with Headcrabs and humans that have become zombie-like creatures. These parts mostly take place in narrow and usually dark corridors. In these sections, you must accurately aim your gun and have the account of ammunitions, because the enemy can quickly get close to you and attack when you want to reload your weapon. Lack of ammunition and vision in these parts causes them to feel a little terrifying. The other part of the combat is fighting with heavily armed Combine soldiers. They use advanced guns and are more intelligent but less frustrating than Headcrabs. The game maintains an outstanding balance of how many enemies that will attack you at the same time, and you will not encounter 20 enemies shooting at you from every corner like massive FPS games. If they put this amount of enemies at one scene, due to the nature of the VR games, the gamer may lose its focus, so in each seen, we have exactly that amount of enemies which make the game challenging, rapturous and enjoyable at the same time. 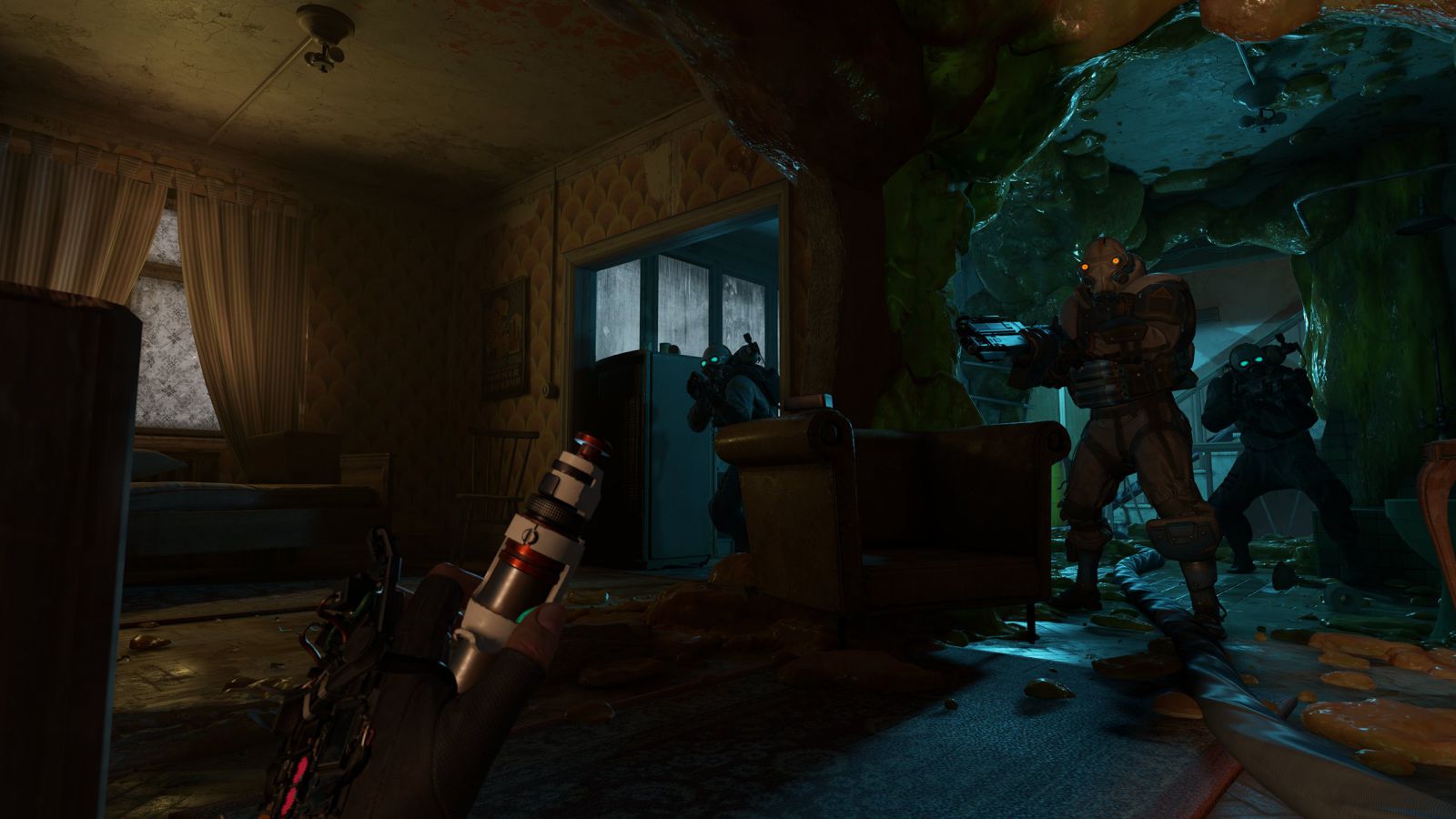 Combine soldiers are one of your primary concerns in the combat.

Another essential thing about combat is weapons. There are only three weapons available in the game, but all of them are very well designed and balanced, and each one of them has advantages and disadvantages over the other ones, so you should use all of them wisely to progress. Weapons can be improved using a material called resin. Upgrades do not consist of simple damage or ammo increase multipliers, but you will also find functional upgrades like shotgun auto-reload or laser pointer that will change the way you play the game. You can find resin by exploring every corner of the rooms you’ll walk into, and with this method, the game encourages you to search the very detailed world of this game and experience all things Half-Life: Alyx can offer to them.

One of the main concerns of fans before the release was about the movement system. Most of the trailers showed that the player could move by selecting a point, and the character just blinked to that position. Despite these concerns, the game features a fluid continuous movement system. Albeit, there are accessibility options that can move the trailers that you blink (or shift) to a point by selecting it. It is a good option for people who may have motion sickness issues, but as I said before, you can use a full movement system that can make the game a little more complicated but helps in making the game more believable and you’ll feel like you’re walking in the game. 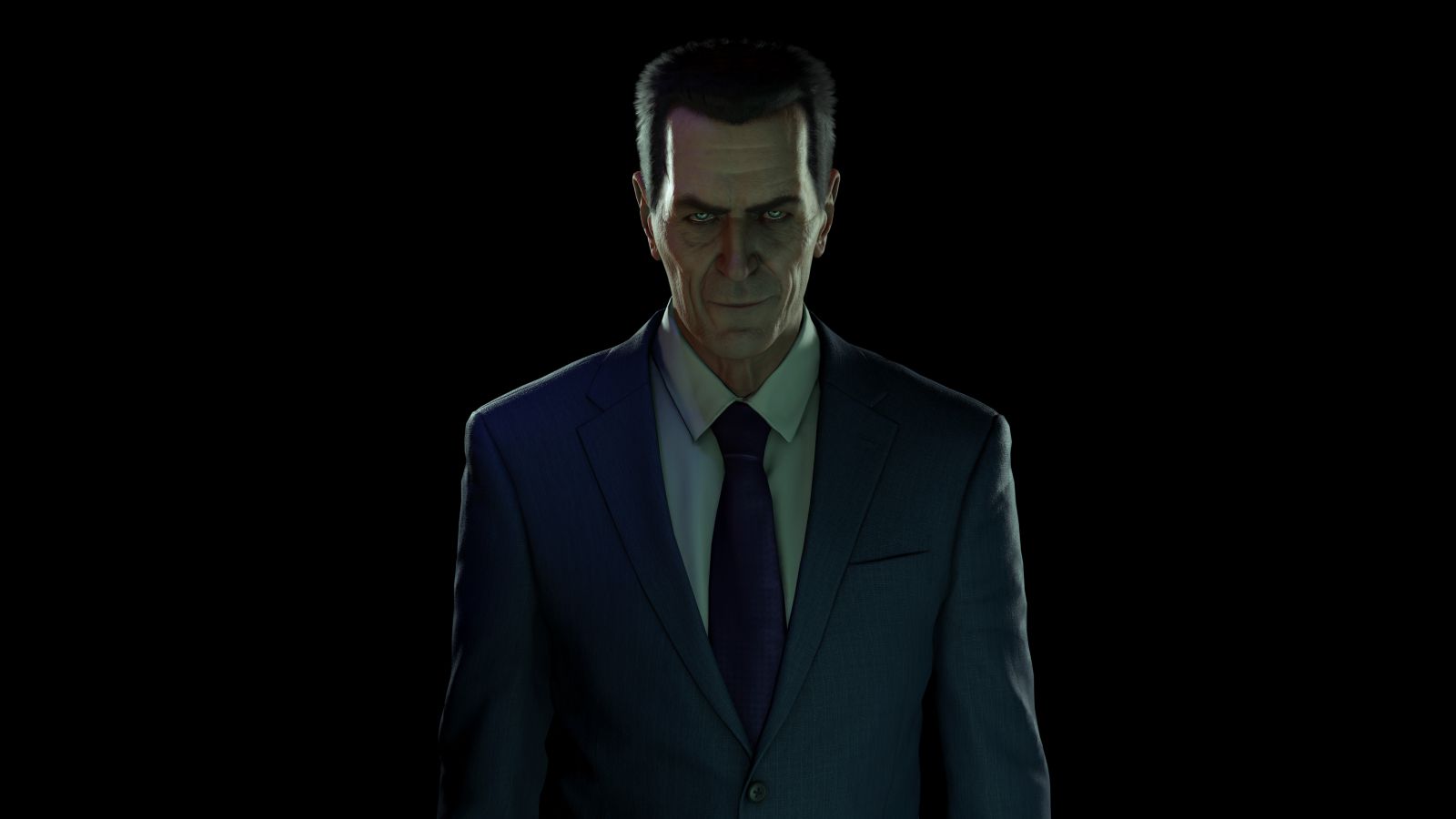 Like previous installments, G-man plays a significant role in the story.

Another central element of Half-Life games is the puzzles. Every Half-Life game introduced new puzzle mechanics, and most of them become industry standards for puzzle design. We have a similar situation for VR puzzles in Half-Life: Alyx. Some puzzles of the game are things that look like concentration tests, and some of them need good thinking about the environment. One of the essential mechanics is the electricity wiring ones; In these puzzles, you must change the electricity flow in the room, and each change you make affects the environment. You may direct electricity to open a place, but this can cause you to lose a light source in the room. So there is not an ideal solution in many situations, and you must analyze the situation and choose the best approach. 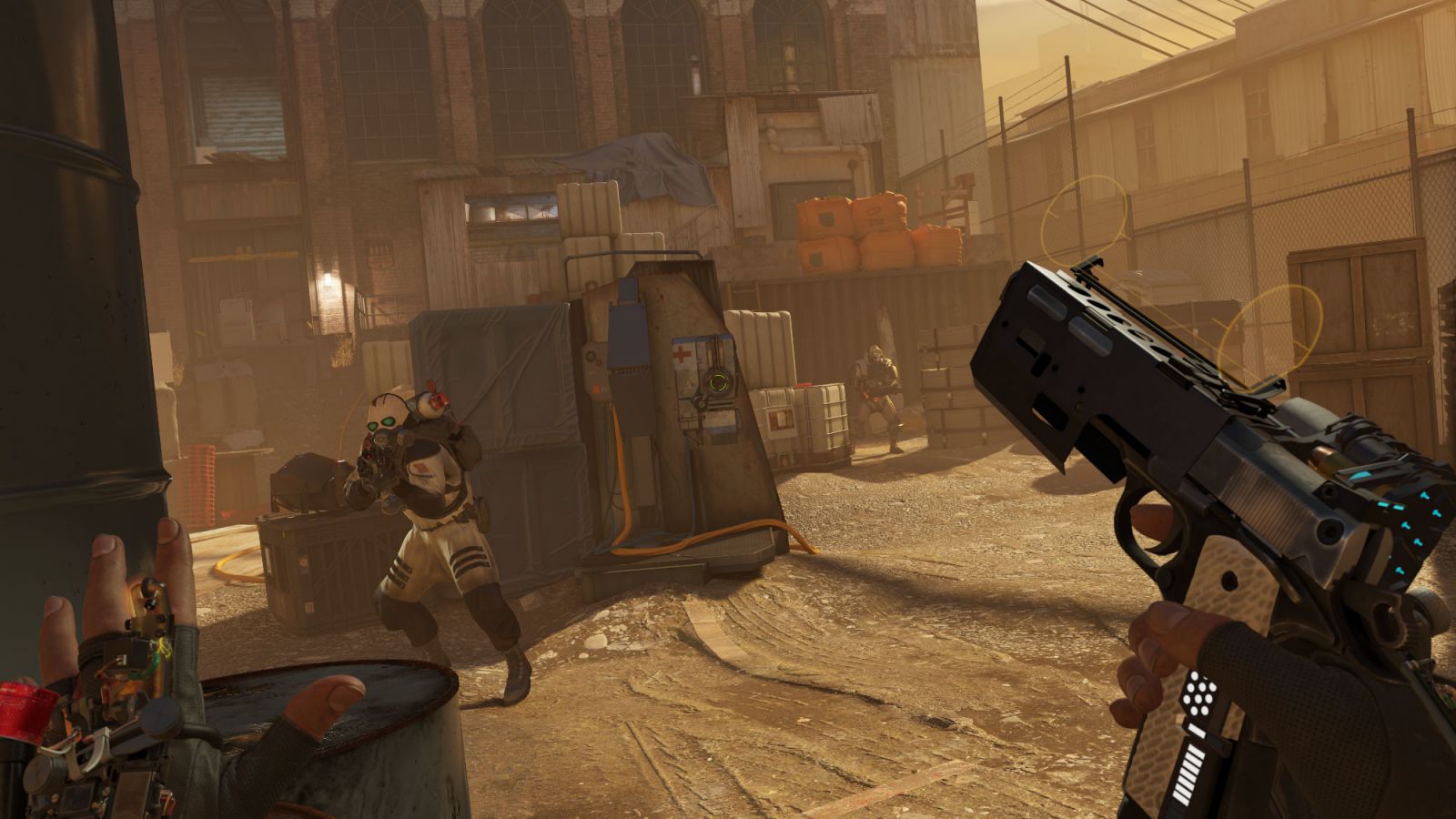 As I mentioned before, gravity glove is also a significant thing in the game. Half-Life 2 created a lot of exciting possibilities by introducing the gravity gun. Still, according to the story, gravity gun isn’t invented in the time of Half-Life: Alyx; instead, we have gravity glove in this game, which is a prototype for gravity gun story-wise. You can use very intuitive gestures to attract objects to your hand, and you must catch them with another gesture. This fluid, intuitive movement design helped the game to feel immersive.

From a general perspective, I can say developers did a perfect job of tailoring the best VR gameplay Experience to date. Almost every aspect of the gameplay is way ahead of most VR games and shows the true potential of Virtual Reality titles.

One of the game’s artworks depicting puzzle mechanics

After gameplay, we must mention the Graphics. In terms of the art design, Valve did a fantastic job of making City 17 an immersive world. You can see story-related details in every corner of the city, and everything fits the setting of the game and puts you into a mysterious city that is conquered by a strange alien race. The technical aspect of the game is another achievement for Valve. It has one of the best graphics between all VR games to date. Also, you can run the game with this astonishing visuals with a decent GTX 1060 at acceptable quality with 80 – 120 FPS that is recommended for a smooth Virtual Reality Experience. 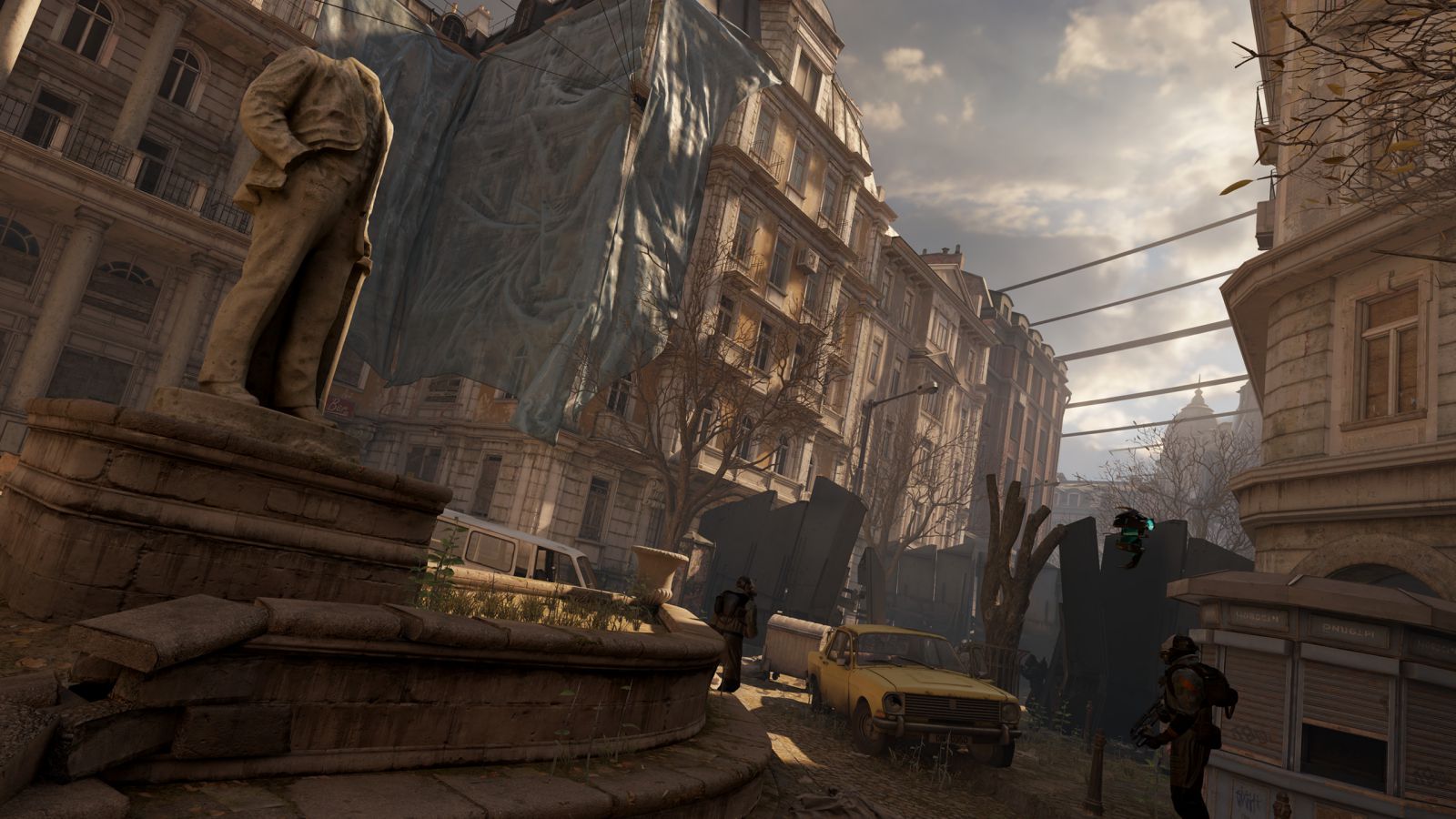 There is no shortcoming in the visual aspects of the game.

And At last, we come to sound and music. The game is also flawless in these aspects. The game’s soundtracks are in complete harmony with the story’s atmosphere and will help the developers to create a believable experience. Voice acting, environmental sounds, and all the other aspects related to the auditory experience are also at the highest level possible.

Before the release of Half-Life: Alyx, series’ fans were worried that it might not live up to the expectations. But now, we can say Half-Life: Alyx is an excellent Half-Life game and a perfect VR experience too. Level Design, VR interactions, story-telling, art design, and all other aspects of the game are at a very high-quality level. Every gamer that has access to VR headsets must play this masterpiece.

Your message has been sent successfully.