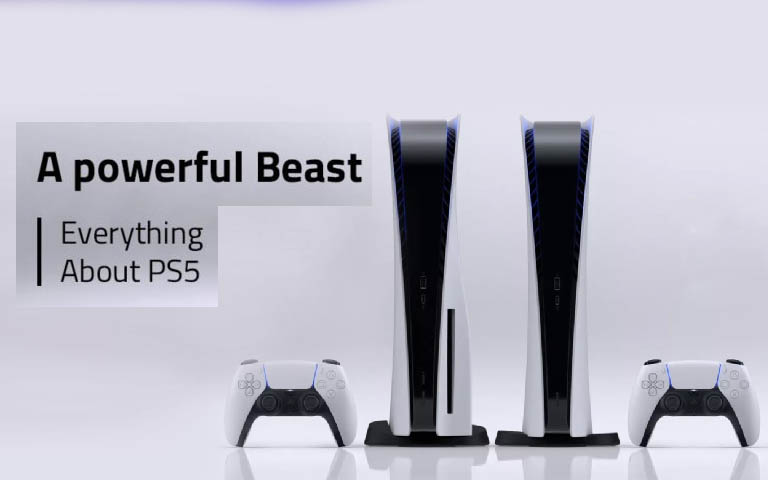 Next generation of Video game consoles Are very close, and we’re approaching the End of This generation.  New Consloes, New Features, New games, an ultimate Gaming Experience!
Let’s just take a look at what we know so far about PS5, its features, Games and more!

Great Video Game consloe demands a greatly made Controller. Let’s start with dualsense.
The formal reveal of the DualSense confirmed what we’ve heard about the PS5 controller features for a while, namely that haptic feedback will replace the DualShock 4’s rumble technology.

While the rumble technology seen in the PS4 controller vibrates intensely during particular in-game events, it wasn’t particularly fine-tuned to the player’s experience. Haptic feedback simulates touch, meaning the controller will output vibrations or movements to replicate a real-life touch experience. This aims to improve the controller’s feedback and therefore player’s immersion with Sony saying it “adds a variety of powerful sensations you’ll feel when you play, such as the slow grittiness of driving a car through mud.”

The PS5 controller will also feature adaptive triggers which Sony says have “been incorporated into the trigger buttons (L2/R2)”. These adaptive triggers will allow developers to program the resistance of the triggers to simulate actions more accurately, “so you can truly feel the tension of your actions, like when drawing a bow to shoot an arrow.”

There’s no Share button on the DualSense controller, but there is a Create Button, and it’ll perform the same function and more. “We’re once again pioneering new ways for players to create epic gameplay content to share with the world, or just to enjoy for themselves,” is how Sony describes it. Expect more on this as we get closer to launch.

The PS5 will still feature an audio jack, too, so you can plug in your own headphones and headsets.

It will also include a built-in microphone, and Sony says you’ll be able to use this to talk with your friends online without the use of a gamepad. Of course, for folks who still want one, Sony says it will still support them.

Now About PS5 itself, let’s take a look at its Specs Confirmed by sony.
CPU: AMD Zen 2-based CPU with 8 cores at 3.5GHz (variable frequency)

PS5 will support backwards compatibility with seemingly all PS4 games, due to it being “based in part on the PS4’s architecture.” The performance boost of the PS5 is so significant, however, that these games will need testing. Sony has said that the majority of the top 100 most played games are working, so expect support for the biggest PS4 titles at launch

PS5 will be released in two different versions with two different ptices.  a digital-only version and one which can support physical media. Both options will be available at launch.

Game installations will be more configurable thanks to the way the SSD works. players will have much more freedom in term of Data and Downloading, for instance they will be able to delete a single-player campaign, without removing the multiplayer, if the developers provide this support.

Confirmed PS5 accessories include a Charging Station (for up to two DualSense controllers), a Pulse 3D Wireless Headset, a Media Remote and HD Camera with “dual 1080p lenses”.

PS5 PSVR support, at least with the current headset, has been confirmed. There is a leak, in the form of a patent filed in February 2019, of a new headset that will have two front and one rear camera, with an additional camera on a Move-style controller. There is also a mention that this could all be operated wirelessly.

The PS5 home screen will be more dynamic. This includes being better off at showing live elements, such as displaying available missions or allowing players to select their activity in real time. “As a player you just jump right into whatever you like,” Cerny explained.

In term of Exclusive Games, Sony has Obviously bested Microsoft in last two generations. Just in this generation, We got to play tons of amazing Exclusive games on PS4, From new IPs Like Bloodborne, Horizon Zero Dawn, Nioh and days gone to New installments of Popular franchises like God of war, Infamous second son, Uncharted 4, Uncharted lost legacy, the last of us part 2 and many other games. that’s tons of Amazing Exclusive games. Thanks Sony by tth way. You’re amazing!
So apparently, it seems that Great PS5 Exclusives will be on Their way in a few years.

So far, two Major Exclusive games have been announced for PS5. The first one, as you probably know, is Horizon: Forbidden West which will serve as a sequel to Horizon: Zero Dawn. Unfortunately, we don’t much about this Game, but we’re hoping to get more information in coming months. It seems that guerilla games is Using PS5 Capabilities to its fullest to create another masterpiece in world of Horizon.
The second Significant Announcement, was Marvel Spider-Man:miles morales. As the name suggests, this time Story revolves around Miles morales and his Struggles with his Super powers. Much like Uncharted:Lost legacy, Spider-Man: miles morales Is a spin-off so we can expect a similar game to Marvel Spider-Man, with focus on miles moales story.
There are other Exclusive games that are on their way to PS5, but they can’t be considered a Huge deal in term of Exclusive games. But just to inform you, lets take a quick look at them:
Astro’s playroom
Destruction all-stars
Gran Turismo 7
Ratchet and clank: rift apart
Returnal