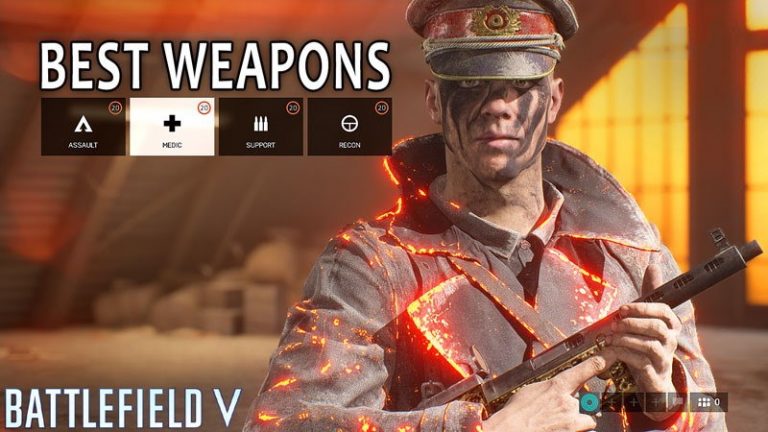 Depending on your play style, you may begin to favor one weapon over the others. This gun will be different for many players, but in general, there will be a few weapons that are best suited to each of the four classes. We’ve listed the best Battlefield 5 guns for each class below, based on our time spent with Battlefield V so far. 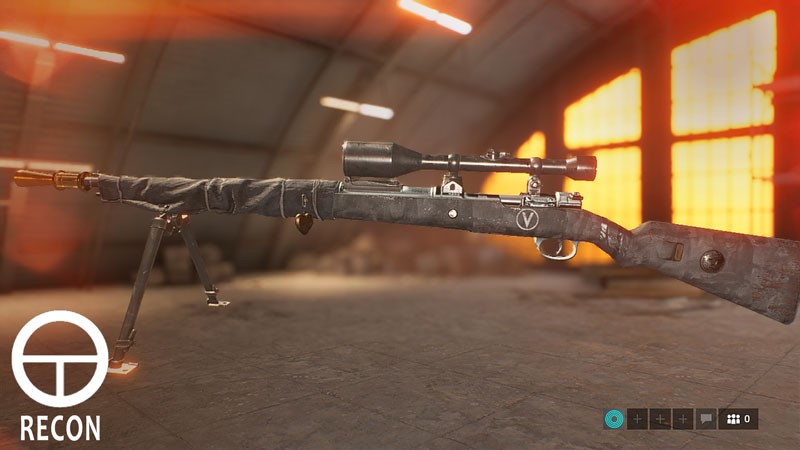 LEE-ENFIELD NO.4 MK I – The Lee-Enfield No.4 Mk I is the starting weapon of the Recon class and is unlocked by default. Of all the bolt-action rifles in the game, the weapon has the largest magazine capacity and highest fire rate, at the cost of a categorically lowest muzzle velocity of 600 m/s. These characteristics make the weapon more suited for medium-range engagements than its counterparts, with the rapid cycling and generous capacity being more forgiving in the event of missed shots. Per-shot damage is low but consistent, with only a difference of 5 damage between its maximum and minimum per-shot effect.

LEE-ENFIELD NO.4 MK I Details

KAR98K – The Kar98K is the final unlock for the Recon kit, granted at rank 20 of the respective class. The Kar98k performs best at the range, with both the second-highest muzzle velocity (tied with the Krag-Jørgensen) and damage in class. However, it has the lowest default rate of fire in its weapon category and a mediocre magazine capacity of five rounds, which can be reloaded using a stripper clip unless the Medium or Long Range Scope is equipped. 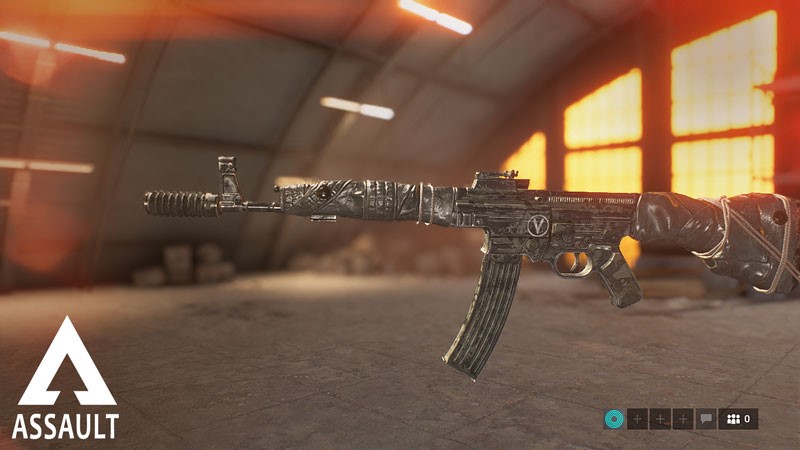 M2 CARBINE – With the exception of velocity, the M2 Carbine is statistically different from the M1A1 Carbine, the most notable of which is the addition of select-fire capabilities. It is also fairly distinct amongst assault rifles – whereas all of its contemporaries kill in four hits, the Carbine is a minimum five-body shot kill. This means that damage is consistently lower than all other assault rifles regardless of range, however, this is offset at close range by its very high rate of fire which allows for the second quickest minimum achievable time-to-kill in its class, behind the M1907 SF. Combat at the range is further aided by relatively low recoil and semi-automatic capability. Magazine and ammunition capacity are also above average for the class, rounding out the weapon’s versatility.

M1 GARAND – Statistically, the Garand can be categorized amongst the middle-range, clip-loading semi-autos of the Turner SMLE and MAS 44, it being a relatively high fire rate rifle with a potential to kill in three hits out to 30m, four at 100m and five at all other ranges. There are several minor differentiating characteristics, however, with the most notable departure lying with Garand’s controllability, reloading method, and capacity. By default, the M1 features the lowest vertical recoil of any of the semi-autos, which allows accuracy to be maintained even at high fire rates. Muzzle velocity is also a respectable 780 m/s, outperforming the long-range semi-automatics such as the Gewehr 43 in this regard. The weapon is also fed by an en-bloc clip, which prevents magazine “topping-up” possible on stripper clip-fed rifles in exchange for a uniform partial reload speed, and faster empty reload. These favorable characteristics combined are paid for by an eight-round magazine capacity – two bullets less than the standard fare – which limits the number of targets the user can engage before reloading. Overall the soft recoil allows the user a higher degree of precision, required to make up for the reduced capacity.

STG 44 – The STG 44 is the Rank 13 weapon of the Assault class and the last assault rifle acquired from class progression. It shares some statistical similarities with the Sturmgewehr 1-5, with both weapons having the same muzzle velocity and magazine capacity. The STG 44 has the second slowest full-auto fire rate out of the assault rifles at 600 RPM, beating only the Ribeyrolles 1918. This gives the STG 44 a modest time-to-kill at closer ranges and helps mitigate the weapon’s heavy per-shot recoil which is the second-highest among the assault rifles. Despite this, the slower firing rate means the STG 44 can achieve accurate shots at a decent range. To assist with its accuracy, the STG 44 has very low first shot recoil, which extends to its fourth bullet, making burst firing extremely effective for further ranges. The STG 44 has a solid magazine size of 31, which complements the weapon’s slower fire rate compared to the other assault rifles, allowing the weapon to stay in the fight for longer. The reload is a bit on the slower side, which can be detrimental during close-quarters combat. 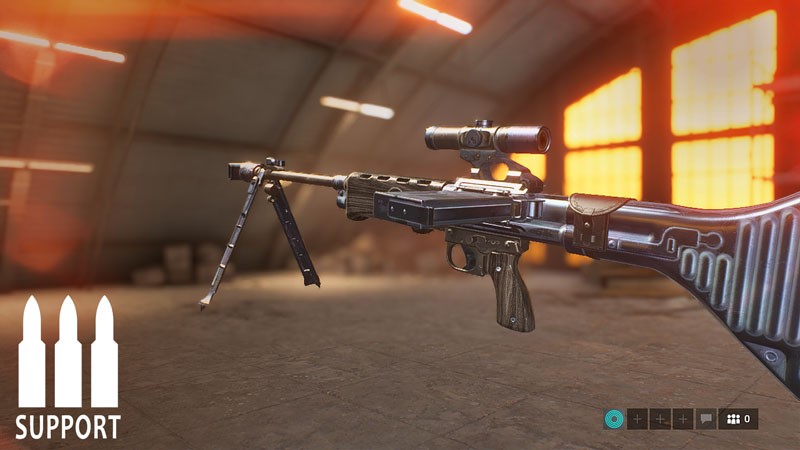 MG 42 – The MG 42 is the second unlockable medium machine gun, and is the final unlock for the Support kit overall, available from rank 20.

The MG 42 possesses the second-highest rate of fire amongst all fully automatic weapons at 981 RPM, which can be bolstered to 1200 RPM when using the Light Bolt specialization. As such it has one of the shortest times-to-kill of both the Medium and Light machine guns. Similarly unparalleled is its levels of recoil, being very difficult to control unless used in short bursts or when aided by the Recoil Buffer specialization, on top of having the highest per-shot recoil in class. Furthermore, its accuracy and control in the hip fire are the lowest possible, statistically.

As with all other Medium Machine Guns, the MG 42 is best used defensively, where its high rate of fire can have a rapid, deadly effect against exposed infantry. Its inability to use Iron Sights when not supported by a Bipod, and abysmal controllability when hip fired, make the MG 42 generally unsuitable for offensive, shoot-on-the-move playstyles, except at extremely close quarters where accuracy is effectively guaranteed.

FG-42 – The FG-42 is unlocked for the Support at class rank 16. With the highest fire rate and the lowest magazine capacity of the LMGs, the FG-42 has the second quickest time to kill in its class (behind the BAR M1918A2 on its Fast ROF mode), at the cost of low controllability and frequent reloads. With per-shot vertical recoil being the highest in its class in addition to possessing higher than average horizontal recoil, the FG-42 can be unpredictable during an uninterrupted fire. Although its integral Bipod and select-fire capability allow it to engage targets at an extended range, the weapon’s recoil characteristics generally favor a more aggressive playstyle, at least compared to the other weapons in said category.

12G AUTOMATIC – Presently, the 12g Automatic is the only semi-automatic shotgun in the game. It has a higher fire rate than the pump-action M1897, but lower than the M30 Drilling. Its default magazine capacity of 4+1 is on par with the M1897, as is spread, damage range, velocity, and pellet count. However, the 12g Automatic has a slightly slower per-shell reload and a marginally faster empty reload, as well as being faster to ready when reload canceling. Overall, the 12g Automatic has the lowest damage potential amongst the shotguns – despite still being capable of a one-hit kill in close quarters, the range at which this is possible is 1m shorter than the M1897. Recoil is the lowest in its category but is still high in relative terms – when fired at max rate, some compensation is required to keep follow-up shots on target.

M30 DRILLING – The Drilling is unlocked for the Support kit at class rank 13. It is fairly unique amongst the shotguns, as the player can use the select fire function to switch between the two shotgun barrels and the single rifle barrel. The two systems have individual ammo pools and are reloaded independently of one another by using the fire selector. Firing 12 Gauge Buckshot, the shotgun portion of the weapon has both the highest fire rate in its class as well as superior damage potential – this is partly due to the higher pellet count at 48, which greatly increases both damage output and chance to hit.

The considerable offensive power of the M30 is limited by the lowest per-reload capacity of only two rounds. This means that although kills are achieved more consistently within a close to medium range, with a second follow-up shot available almost immediately if necessary, reloads are inexorably frequent – the per-shot reloading process is also the longest in class. The requirement is that players are generally limited to confrontational engagements against one or two enemies at a time.

TYPE 2A – The primary strength of the Type 2A is its very short Time-to-Kill, shortest out of any of the submachine guns as a direct result of its high rate of fire, which even exceeds the default MG 42. This is despite a mediocre five-shot kill at minimum range and high damage drop-off past 10m, characteristics inherited from the use of Type 100’s damage model. Its rapid consumption of ammunition is counteracted by very quick reloads, although its effectiveness at medium range is further hampered by low muzzle velocity and very high recoil. Regardless, the Type 2A overshadows much of the competition at close range thanks to its power and responsiveness.

TYPE 100 – The Type 100 can be considered lower damage but a more controllable alternative within the high ROF subcategory of submachine guns, comprised of the Suomi KP/-31, MP28, and M1928A1. Possessing a partially unique damage model that features lower base damage, the weapon is a minimum five-shot kill out to only 10m, after which point it suffers relatively severe damage drop-off, typically taking an extra bullet or two to kill at all ranges except maximum when compared with four-shot minimum SMGs. However, to balance this Type 100 has a high fire rate of 720 RPM, combined with the lowest recoil amongst the submachine guns, tied with the default ZK-383. This allows the weapon to keep pace with most others at close range, while also helping accuracy at medium range with minimal compensation. Recoil can be further reduced by using the bipod, although mediocre muzzle velocity can interfere with hit probability and long-range. Magazine capacity and reload speed are both standards.

SUOMI KP/-31 – The Suomi is the first unlock for the Medic at class rank 1. It has the highest fire rate of submachine guns, outperforming the similar M1928, of which it shares an identical upgrade tree, for greatest damage output and thus the quickest time-to-kill in its category. However, the ability to make hits when firing in fully automatic is limited by severe recoil. In addition to its highest in-class per-shot recoil, the Suomi KP/-31 possesses similarly unprecedented horizontal recoil that can make recoil patterns difficult to anticipate and adjust correspondingly. Furthermore, the default magazine size is a paltry 20 rounds which can be depleted in just over a second of uninterrupted fire. While undoubtedly effective when in close-quarters engagements against a single target, the Suomi may struggle to maintain its dominance past this distance, especially when faced by multiple opponents.

We have reached the end of Battlefield 5 best weapons guide. We hope this article is useful for you.